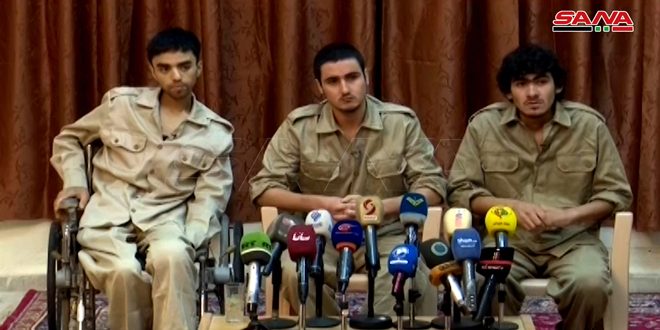 During a security operation carried out with the help of the Syrian Badia’s residents, an ambush was set up against an ISIS terrorist group composed of 6 members where 3 of them were killed and the remaining ones were arrested.

The three arrested ISIS terrorists confessed that they perpetrated many terrorist operations, including murder, execution, kidnapping and acts of destruction .

Many of these terror operations were carried out upon coordination between ISIS ringleaders and US occupation forces that exist in al-Tanf area on the Syrian-Jordanian border.

The terrorist Salah Jaber al-Daher – AKA Abo Abdul Rahman al-Salafi, born in Idleb in 1998, said that he joined ISIS organization through one of his relatives [ called Abo Salam Omareyeh] who was among the members of this Takfiri organization and he exploited his need for money and introduced him to another person called Samer al-Bori, who transported him to Jabal al-Bashari area in the Syrian Badia where he was welcomed by ISIS terrorists , including Abo Islam. This took place in 2018.

On his part, the second terrorist Abo al-Baraa al-Homsi, born in Homs in 1999, said that he met a person called Firas al-Khalid in Homs city in 2017. This person had a clothes shop and proposed to give him USD 100-200 and to transport him to Raqqa to join ISIS. He accepted the proposal because he was in need of money.
The third terrorist, Amer Abdul Ghaffar Neameh- AKA Abo Swan- born in Hasaka in 2001, said that he communicated via Whatsapp with his cousin Wahid Meameh, who was in the Badia and he told him that he will get money and a car if he joins the organization.

The 3 terrorists confessed that they were trained for several weeks by ISIS judges, who told them that they are Jihadist and any person fighting against ISIS is an infidel. They were also trained on how to use guns and rockets, including US rockets.

The terrorists were introduced to the so-called ISIS emirs of several nationalities besides fighters of French, British and Indonesian nationalities.

As for some of the crimes in which those terrorists were involved, the first terrorist [ Abo Abdul Rahman al-Salafi] said that he killed 21 people while they were searching for truffles and he carried out operations against Syrian army’s convoys.

“We were setting up ambushes against the Syrian army and civilian cars in several areas in aal-Badia'” he added.

One of the terrorists said: ” A person closed to al-Jezrawi, his name was Hasan al-Wali, told me that he met Americans in al-Tanf base and they told him that we must attack Palmyra region and the T4 airbase and they will provide us with rocket launchers, guns, money, cars and drones. They downlaoded Tag program on their mobiles to observe the movements of the Syrian army. Al-Jazrawi said that he will do that but he needs time to bring fighters from Euphrates region because the current number is not enough”.
The terrorists asserted that there is coordination between ISIS ringleaders and the ringleaders of ” Maghawer al-Thawra” which is affiliated to the so-called the “Free army” in the vicinity of al-Tanf base.
The terrorists were ordered to keep in touch with their ringleaders in order to go in and out the base.
The terrorists cited that the ISIS terrorists were holding the kidnapped people in holes under the ground, in trenches and cars.

The Terrorist pointed out that there were negotiations between ISIS ringleaders in Raqqa and the ringleaders of the US-backed “Syrian Democratic Forces”.

One of the terrorists admitted that the US and SDF forces covered their move from Raqqa towards Der Ezzour.

The terrorists affirmed that three ISIS members : Abo Sofyan al-Jazrawi, Abo Jnid al-Halabi and Abo Brahim al-Demashqi, who were in charge of financial managent in Badia, were going every month to al-Tanf base to bring 3 trucks loaded with food, weapons and money ro be distributed among ISIS members in Badia region.

Every terrorist gets $100, while ringleaders gets $500 and the military Wali gets $1000.
Al-Tanf base was a safe place for terrorists to receive medical treatment when they were injured.

State Senator Calls US Base in Syria a Violation of International...