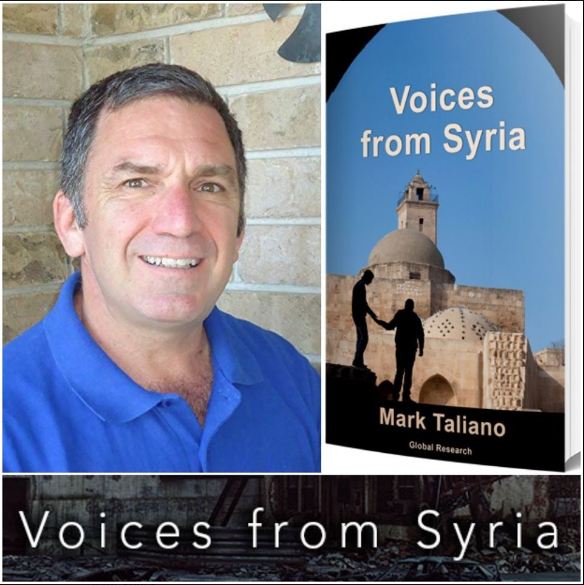 “Mark Taliano [00:37:53] We are definitely the terrorists. OK? The global war on terror is a fraud. It’s a total fraud. It’s a program to create Islamophobia and to go after terrorists that we create and support. The terrorists, they are proxies on the ground in Syria. And our governments despite the words that come from politicians’ mouths, our governments are deep state agencies that actually create Islamophobia. That’s their intent. And Justice Bruce proved that when a bunch of security personnel, governing agencies, Canadian government agencies, set up two hapless people and framed them for kettle pot bombing on Canada Day years ago. The judge said, “That’s not your job to do this. You’re not supposed to be creating terrorism.” But that’s exactly what these government employees were doing. They were creating Islamophobia on purpose. Okay so there’s a big propaganda war and is a big military psychological operation. The war on terror is a fraud. We are supporting the terrorists.”

Having spent years observing and researching, Taliano explains in detail which western politicians support terror, how humanitarianism is feigned to cover crimes, and why mainstream media is corrupt to the core.

On The Beloved Community, John Shuck speaks with Mark Taliano, author of Voices from Syria.

Three years ago, Mark Taliano travelled to Syria in attempt to hear from Syrians what is really happening in their country. Mark writes:

“Between 15 and 23 September 2016, I travelled to war-torn Syria because I sensed years ago that the official narratives being fed to North Americans across TV screens, in newsprint and on the internet were false. The invasions of Afghanistan, Iraq, and Libya were all based on lies; likewise for Ukraine. All of the post-9/11 wars were sold to Western audiences through a sophisticated network of interlocking governing agencies that disseminate propaganda to both domestic and foreign audiences. But the dirty war on Syria is different. The degree of war propaganda levelled at Syria and contaminating humanity at this moment is likely unprecedented. I had studied and written about Syria for years, so I was not entirely surprised by what I saw. What I felt was a different story. Syria is an ancient land with a proud and forward-looking people. To this ancient and holy land we sent mercenaries, hatred, bloodshed and destruction. We sent strange notions of national exceptionalism and wave upon wave of lies. As a visitor I felt shame, but Syrians welcomed me as one of them. These are their stories; these are their voices.”

We will spend the hour with Mark, hearing from his perspective, a perspective quite at odds with the official US government narrative.

We were also joined by Anglican priest, Rev. Andrew Ashdown, who has travelled all over Syria and met hundreds of people.

Interlocking Agencies that Conspire to “Create Terror”: We Do Not Need...