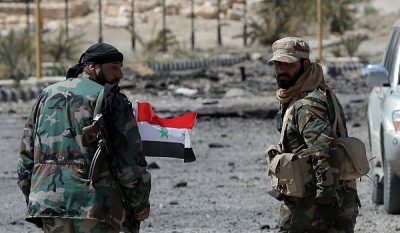 All of the mainstream Western news sources dealing with the war on Syria have been discredited. This helps to explain why the mainstream news stories amount to criminal war propaganda.

Mainstream news sources are all embedded with the terrorists, who are proxies for the West.  The White Helmets[2] are an intelligence construct paid for by the West and its allies to serve the function of public relations front for al Qaeda and al Qaeda-affiliated terrorists.  This has been proven beyond a reasonable doubt.  Similarly, news sources such as Amnesty International, Human Rights Watch, Syrian Observatory for Human Rights[3] and others are all partisan, supported by the West, and sources for propaganda stories. These sources are part of the hybrid warfare complex which is engineering consent for more war crimes against Syria and her peoples, hence they are criminal according to Nuremburg Principles.  War propaganda is a crime.

The West wants to escalate its aggressions against Syria, so the war propaganda is also escalating. MSM news consumers should be aware though, that all of the allegations against the Syrian government have been proven false. The alleged gas attacks have all been false flags.  The Caesar photo[4] evidence alleging Assad’s atrocities against his own people is fraudulent.  The Saydnaya[5] stories are fake.

The West invents stories and engineers false flags so that its disastrous, holocaust -generating invasions can be falsely viewed as “humanitarian” or as the fruit of a “Responsibility to Protect”.

In the past few weeks alone, Western-supported terrorists have launched more than a thousand bombs onto the citizens of Damascus.  Terrorists deliberately target schools, hospitals, and shopping centers, and these mortars have so far murdered about 11 civilians over these last few weeks. Pictured below are some of the terrorists’ victims.

The mortars come from East Ghouta, in the Damascus area, and to the relief of Syrians, East Ghouta is the next target for the legitimate Syrian military to address.  The Syrian military has every right, and in fact is duty- bound, to protect its citizens and to destroy and/or neutralize the terrorists.

Tom Duggan has lived in Syria for a number of years.  What follows is a daily report directly from Syria. Duggan’s analysis is consistent with 7 years of evidence-based observations.  It is credible reporting.Entering the Ring of War Propaganda

News from mainstream media, sometimes referred to as “colonial” media, is nothing short of war propaganda.

Those of us who are allowing ourselves to be misled by mainstream war propaganda must share some responsibility for the current overseas holocaust that is being perpetrated thanks to our monies and our tacit consent.

Featured image is from Farsnews