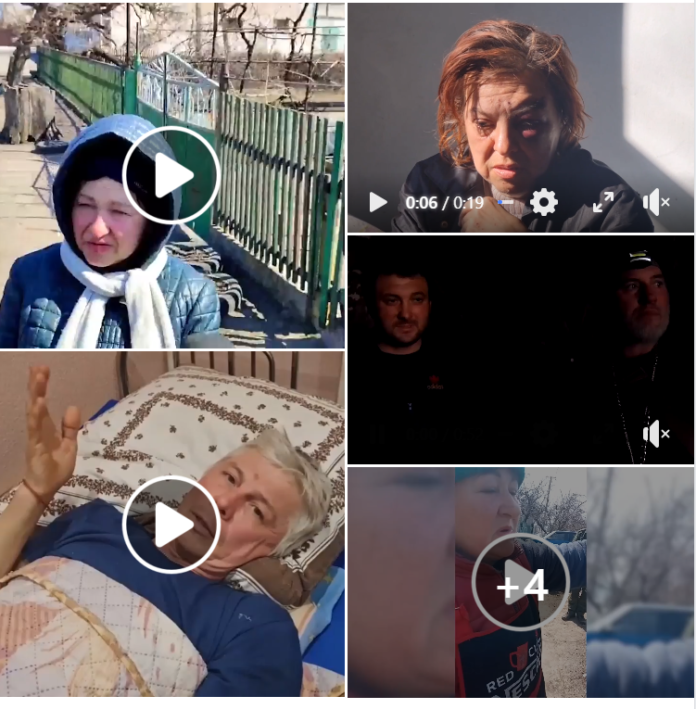 “In the neighboring house No. 21, a female sniper was sitting, as well as soldiers of the Armed Forces of Ukraine. They constantly ran from house to house, changed their positions, they shot at the local population…”

https://t.me/mod_russia_en/705*”….I passed by a kindergarten, the Azov people settled there. We saw how they left the kindergarten in search of convenient positions, they came into our yard…”

Alexei, a resident of Mariupol, was shot in the leg as he walked by a kindergarten turned into a fortress by nationalists. He is now being treated in a Donetsk People’s Republic hospital.”https://t.me/mod_russia_en/706*”

“When we tried to get out on the bridge in order to calmly leave the city, snipers fired at us. They were “Azov”, with blue armbands…”

Russian servicemen and Donetsk people’s militia assist civilians and organise evacuation of residents from Mariupol who are being held in the basements of buildings by Ukrainian nationalists.”https://t.me/mod_russia_en/707*”

“…They occupied the floor of the traumatology department in the hospital, installed grenade launchers and started shooting. There were about forty people – bedridden patients…”

According to Mariupol residents, soldiers of the Ukrainian Armed Forces and nationalist battalions used kindergartens, schools and hospitals to set up permanent firing positions.”https://t.me/mod_russia_en/710*

“…And then all the houses were shot from machine guns. – Who shot? – Azov. Azov. – Did they shot children and women? – Yes…”

https://t.me/mod_russia_en/712*”Ukrainian army, national guard and damned Azov. They destroying everything, plundering cities and filming videos to show around the world: Look what Russia is doing…”

Mariupol citizens evacuated from the basements of the city hospital by Russian soldiers reveal the inhumane treatment of Mariupol residents by the Nazi battalion fighters.”https://t.me/mod_russia_en/724*

“I ended up in the hospital on March 2 thanks to, so-called the brave Azov combatants who destroyed my apartment…”

Residents described what they had to deal with while soldiers of the Ukrainian armed forces and fighters of the nationalist Azov battalion were in charge of Mariupol.”https://t.me/mod_russia_en/726*

“We were begging for water, but they didn’t even bother, they gave us nothing. Wherever you go, the Ukrainian troops are fiiring everywhere and simply do not let people go anywhere. People just died from hunger and dehydration….”

READ MORE: They Saw and Heard the Truth — Then Lied About It: Media on Donbass Delegation Omitted Mention of Ukraine’s 8 Year War on the Autonomous Republics – In Gaza (wordpress.com)