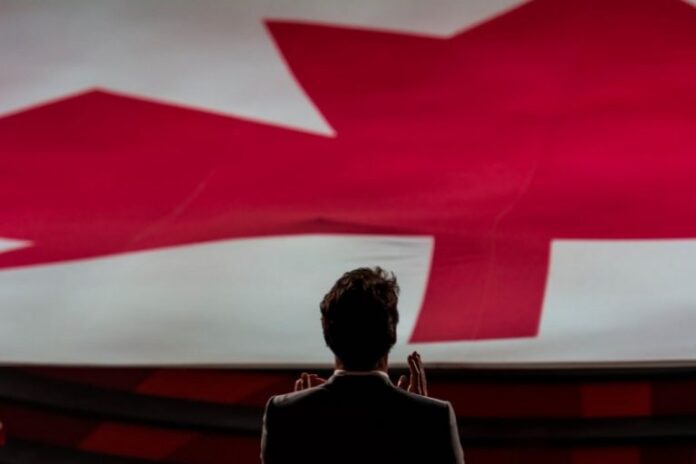 The current regime in Ottawa has become the most dangerous, lawless government in Canada’s 155-year history as an independent nation.

“The greatest tyrannies are always perpetrated in the name of the noblest causes.”—Thomas Paine

As a former officer in the Canadian Armed Forces, I am appalled at the direction this great nation has taken. If someone had told me twenty-five years ago that one day citizens of Canada would be arrested for peacefully demonstrating in the streets of our nation’s capital, I would not have believed it possible. And yet here we are today, watching the government shred our Charter of Rights and Freedoms by threatening and trampling—sometimes literally with police horses—Canadians who wish to send a message of love and a plea for freedom.

Prime Minister Justin Trudeau has subjected 38 million people to the first and only invocation of the sweeping Emergencies Act we have ever seen in this country. Shockingly, he has done so without any justification. Even more egregiously, he has asserted these powers in order to solve a problem that he himself created and deliberately exacerbated.

Both before and after he made this unprecedented motion—which the House of Commons approved on February 21, 2022, but which was rejected by the Senate two days later—Trudeau has been acting equal parts coward and tyrant. He has refused to engage in negotiations—or, for that matter, in any dialogue whatsoever—with representatives for hundreds of thousands of working-class protesters, deeming them a “small fringe minority” who hold “unacceptable views.” What he means is that they do not share the vision of his puppet-masters at Klaus Schwab’s World Economic Forum (WEF).

Throughout the thus-far-month-long standoff, the Prime Minister has uttered a string of pejoratives, painting anyone who dares dissent from his (read: the WEF’s) technocratic agenda and totalitarian tactics as a “racist,” a “misogynist,” a “terrorist.” He has even resorted to the vile term “Nazism” as an excuse to dodge face-to-face meetings with his Canadian brothers and sisters from all walks of life. Rather than listening to what they have to say, as a true leader would, he has treated citizens with callous, arrogant disregard for their human rights, their legitimate demands, and their state-imposed suffering.

All of this is to say that, from everything I have seen or studied, the current regime in Ottawa has become the most dangerous, lawless government in Canada’s 155-year history as an independent nation. Over the past two years, it has displayed a wanton disregard for the rule of law and the legislative process, putting in place mandates that have not been voted upon by Parliament. In so doing, Trudeau and his cabinet have illegally and incrementally restricted the rights and freedoms of all Canadian citizens.

To wit: In the last two years, the Prime Minister, his administration, and his Liberal Party have been relentlessly coercing Canadians into being violated with an experimental injection that is neither safe nor effective.

To wit: In the same two years, rates of small business failures, depression, suicide, domestic violence, and deaths-by-overdose have skyrocketed across the nation.

To wit: In the past month alone, peaceful protestors—including sympathetic military and police veterans—have been beaten, harshly shoved to the ground, psychologically intimidated, and verbally threatened for exercising their constitutional right to assemble and speak freely.

To wit: In the past week, the Trudeau government has invoked the Emergencies Act and has used it to prepare and execute—even before waiting for ratification by Parliament—a ruthless, privacy-invading plan to track down and disclose the personal information of citizens who financially contributed to Freedom Convoy 2022 or who attended the Ottawa protest—and freeze their bank accounts of some of them.

Thus, even though the Emergencies Act was defeated in the Senate, I believe a new era of authoritarian control is sweeping through our nation’s halls of power. This control grid has been designed to work in concert with the equally authoritarian technocratic agenda of the WEF.

Like most governments in the West, the ruling party in Canada has been heavily infiltrated by members who subscribe to the WEF’s “Great Reset.” Klaus Schwab, the WEF founder and executive chairman, admitted as much in a 2017 interview, when he boasted:

Sure enough, a list of names on a WEF sister website reveals that both Prime Minister Justin Trudeau and Deputy Prime Minister Chrystia Freeland are graduates of the influential Forum of Young Global Leaders. (Freeland is also a member of the Council on Foreign Relations and four years ago gave a talk to that globalist body.) Yet, despite such easily verified evidence, “fact checkers” and Ottawa officials call the existence of this group of globalist technocrats-in-training a “conspiracy theory.”

Given that the Liberal Party has fallen under the WEF’s spell, it should come as no surprise to see the government now fast-tracking brand-new vaccination regulations to be added to the Canada Labour Code. Once implemented, these regulations will require all federal employers and federally regulated industries to mandate and enforce the COVID-19 “vaccination” of employees as a condition of employment. (I put “vaccination” in quote marks because the mRNA doses are actually a gene-altering therapy, not a traditional vaccine that is said to immunize against a disease.) Never before have Canada’s federal workers been required to undergo vaccination to keep their jobs.

Of even more concern is that the soon-to-be-adopted federal vaccination regulations will supersede the provincial governments’ longstanding authority over and administration of healthcare.

Why would such a change in the administrative structure be taking place?

I believe it’s because passing the buck to the federal government provides a great excuse for provincial premiers to relax their unpopular vaccine passport requirements for all Canadians who want to travel and enter public spaces.

The impeccable timing of this change in policy will take the pressure off their political fortunes—a kind of sure-win strategy for the upcoming provincial elections set to take place between June and December of 2022. The unsuspecting voters will be deceived into believing they are free from the shackles of the vaccine passport, when in fact only the goalposts have been moved.

But that is not the worst of it. No, the federal workers’ vaccine mandate and the expected post-elections imposition of a vaccine passport at the provincial and/or federal level are just the beginning of a far more sinister plan.

These envisioned edicts in Canada are simply the initial steps Trudeau and fellow globalist technocrats are taking in their attempt to enslave all the planet’s inhabitants—except, of course, their own kind.

But even if the vaccine passport plan is dropped in Canada and elsewhere, what will definitely come to pass, as sure as night follows day, is a worldwide digital ID system. My confidence in making that claim stems from the constantly articulated aim of the WEF—and of all the central banks—to implement a global system in which everyone’s personal data will be incorporated into the Central Bank Digital Currency (CBDC) network.

Once that goal is accomplished, every aspect of our lives will be controlled, from womb to crematorium, by the so-called 1% who run the world’s most influential institutions and comprise its bluest bloodlines.

(Yes, bloodlines. As in the Rockefellers, Morgans, du Ponts, Rothschilds, British royals, and Dutch royals, to name a few of the supposedly superior families whose wealth and power have been dominating the global population for centuries.)

What do I mean by “every aspect of our lives”?

For starters, what we can purchase with our CBDC money.

And from there . . . whom we may—or may not—associate with. How much electricity we can use in our (rental) dwellings. What we are allowed to read, see, hear, say—and even eat.

Whether and where we can travel. The list of “forbiddens” will keep growing. And so will the social demerits we pile up for bad behavior. That is, for disobeying our slave masters. A similar version of this scheme already exists in China.

I don’t mean to sound hopeless. Despite this bleak peek at an economy being purposely destroyed by the “Build Back Better” architects and engineers at the WEF (and, not to be forgotten, at its parent, the United Nations), I do not think we should despair. For, believe it or not, we are beginning to win the battle for freedom in Canada and in other countries.

It helps that more of us than ever before are “awake” to the globalists’ intentions. Our ranks will only expand in coming months as more and more of the wrongdoing at the top is exposed. (Thankfully, the sunlight of truth is the best disinfectant.)

Moreover, Canadian politicians’ wild misuse of state authority is a sure sign of their desperation—a desperation born of their futile attempt to stop the sudden crumbling of the pseudo-pandemic narrative. The COVID-19 story has been a ruse from its inception, planned over many decades and constructed on a bed of lies. In the end, the current Canadian government, like so many rotten regimes in the past, will be relegated to the dustbin of history.

I implore all active members of Canada’s military and police forces to uphold the highest law of our land.

Promise you will never forget your solemnly sworn oath to defend the Charter of Rights and Freedoms.

Your country is depending upon you to guard it well.

David Skripac has a Bachelor of Technology degree in Aerospace Engineering. He served as a Captain in the Canadian Forces for nine years. During his two tours of duty in the Air Force, he flew extensively in the former Yugoslavia as well as in Somalia, Rwanda, Ethiopia, and Djibouti.

He is author of a recently published e-book, “Our Species Is Being Genetically Modified” and a regular contributor to Global Research.

Our Species Is Being Genetically Modified. Are We Witnessing Humanity’s March Toward Extinction? Viruses Are Our Friends, Not Our Foes

.The original source of this article is Global Research