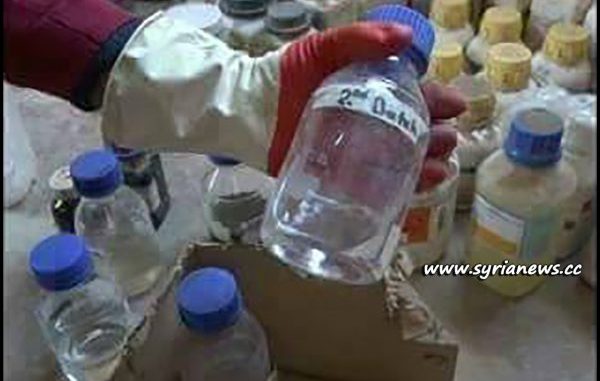 On Friday, October 13, 2017, Units of the Syrian Arab Army performing a routine inspection in al-Rabia village discovered a ‘chemical workshop’ left by ISIS terrorists before they fled the village.

Sama TV, Syrian based television channel escorted the SAA units in Homs province eastern countryside when the SAA found the chemical workshop and aired this report:

Watch the video on BitChute (https://www.bitchute.com/video/ugtZOp54OFAD/), and Flickr (https://flic.kr/p/ZxpqpV), since YouTube deleted our channel for the 2nd time without any valid reason after they re-instate the channel first time without elaborating.

The precise combing of the heroes of the Syrian Arab Army and the engineering teams in the eastern Homs countryside continues after the elimination of the last gathering of remnants of the ISIS terrorist organization in the countryside.

During the combing operations, the authorities found a workshop in the village of al-Rabia in one of the terrorist strongholds. It contained more than 100 types of primary chemical agents used by terrorist groups in their criminal operations.

During the combing of the area east of Jib al-Jarrah and clearing it of the abomination of the terrorists, a large workshop containing primary chemical materials was found in al-Rabia village inside one of the terrorists strongholds which can be used to manufacture many hazardous materials that can be used against safe civilians and on the Syrian Arab Army forces operating in that area.

In addition to a huge range of machinery and equipment for the processing and use of these materials.

It is worth mentioning that these materials and equipment can be handled and used only by high-level specialists.

Machines, equipment, and laboratories found within this stronghold which can only be used by specialists in these substances as a result of the great risk caused by their use.

The strong and precise military operations led to the elimination of armed groups and full control of these materials by the competent authorities.

We are certain that the Western media won’t hesitate to accuse the Syrian state of using chemical weapons, the question remains: How those western and Saudi backed ‘rebels’ got such chemical materials? The West and their regional allies have been supplying terrorists in Syria especially Nusra Front and ISIS with the most advanced weapons and munition, this would be part of these ‘weapons’.

The Effects Of Sanctions On the Syrian Population/ A Report By...