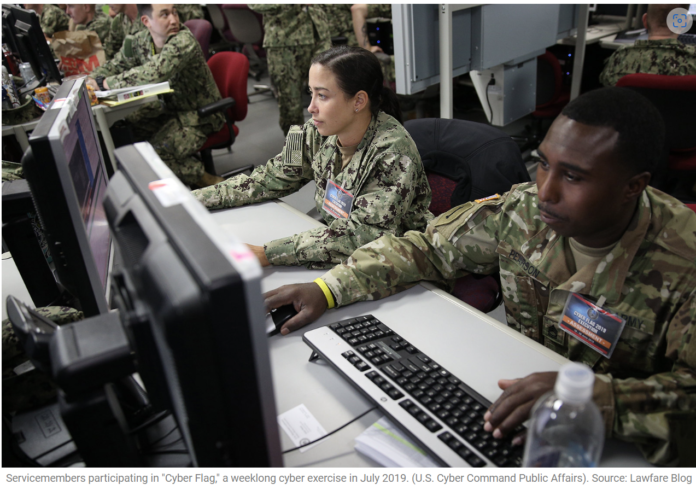 It has been said that power and control in the new world order lie not in preserving territorial integrity, but in the ability to control information; therefore, military psychological operations (PSYOP) are a vital component of national security and they allow the military to more effectively achieve its strategic and tactical goals while minimizing loss of life.

For this reason, PSYOP, which is branded nowadays as the “Like War” because of the dominance of social media,  plays a larger role in today’s conflicts and it is a more attractive option to leaders and politicians. It is based on letter,  word, photo and body language.

Traditionally, PSYOPS soldiers drop messages in the form of leaflets on the battlefield or broadcast messages through speaker systems on jeeps  or broadcast directly into the homes via TV or radio, the voice of America, which is a classic propaganda campaign.

In 1991, PSYOP units dropped over 29 million leaflets to Iraqi soldiers encouraging them to surrender, usually by stressing the inevitability of their defeat. Estimates show that “nearly 98% of all Iraqi prisoners acknowledged having seen a leaflet; 88% said they believed the message; and 70% said the leaflets affected their decision to surrender.” Of the estimated 100,000 soldiers who deserted or surrendered, many were found carrying leaflets in their hands or carrying them in their clothes.

The basic aspects of modern psychological operations  have been known by other names and terms including Military Information Support Operations (MISO), Political warfare (Hearts and Minds), PSYOPS, propaganda.

One of the reasons for the effectiveness of influencing society today is a combination of decadent culture and poor education in America and much of Europe, according to Mr. Bennett., who holds Ph.D. is in Political Theory.

“Education institutions have become indoctrinations centers rather than academies for the exploration of ideas or the free exchange of research. There is an unhealthy emphasis on feelings and emotional issues rather than focusing on concrete disciplines and science or skills such as reason , philosophy, law architecture , mathematics, science , education, etc.  as a result culture has become warped and softened people’s minds in America .  This has also led to an abandonment of religion and moral values and substituted it humanism , which is inherently mentally destabilizing . This mental instability cultivates violence and aggression , and for that reason there is a moral recklessness and blind superiority the west is becoming toxic with which is leading it to these endless conflicts in Ukraine, Syria, Bolivia and other countries as well as waging war against its own citizens who espouse traditional family values and conservative religious identity.  so in short there is a Civil War brewing in the United States.”

Depending on Psychological warfare has been increased after the former US President Barack Obama signed in 2012 an executive order that allows propaganda to be used on American citizens, which means allowing media to purposely lie to the American people.

“We are now at a time where technology is for outpacing morality in the United States….The last 20 years of the war on terror in the empire expansion, which the United States is done in the name of human rights and liberation and other terms of propaganda, are unable to be abandoned, and therefore the US political establishment is media and its military have fully vested themselves in extending and continuing this empire building through information warfare…We see the control of social media companies like YouTube Twitter and Facebook manipulating peoples opinions and attitudes and behaviors….We also witnessed the development of politically correct language and the violent rejection and ostracism and canceling of anyone that contradicts or does not submit to this new ideology of political correctness and wokeism, which includes fanatical ideas on climate change homosexuality and experimentation on children,” Mr. Bennett clarified.

He underscored that the foundation of the American delusion that it has a moral and spiritual right and duty to change governments, people , and cultures anywhere, anytime that it suits the interests of the United States  has been the driving force behind the American military juggernaut in Afghanistan and Iraq and other countries, including Syria.

“Syria was the last nation that America tried to overthrow until Russia and Iran stopped America’s regime change.  From the very beginning we heard the US-NATO- European slogans of saving the Syrian people from President Bashar Al-Assad ; and the psychological war that was waged was waged against the American people and the European people.  The purpose was to brainwash the world  into the false understanding that President Bashar Al-Assad was a cruel torture and dictator , which was a complete lie,” Mr. Bennett said.

In this context, the activist and writer Sue Ann Martinson, wrote on December 5, 2016: “An example from October of 2016 of using mass communication as a weapon of psychological warfare is the work of the public relations company, Syria Campaign, which was created to garner support for U.S. involvement in Syria. Max Blumenthal describes the Campaign: “Posing as a non-political solidarity organization, the Syria Campaign leverages local partners and media contacts to push the U.S. into toppling another Middle Eastern government.”

“As part of the campaign, the White Helmets were promoted as international heroes helping civilian victims, particularly in Aleppo. In this extremely slick campaign, they were featured in the mainstream corporate media, including TIME magazine and on the major TV and radio networks, and even on the alternative news program, Democracy Now! The idea was to win the “hearts and minds” of the American people who are drawn to “do-gooders” or “shining knights.” But as Max Blumenthal notes, this seemingly impartial group was funded by the U.S. to create sympathy for U.S. military intervention and regime change in Syria.”

Mr. Bennett described what happened in Syria as a great tragedy because it was a wonderful country , an innocent country and highly developed country that included among its population, Christians , Jews and Muslims. “ It was a crime against humanity for the west to attempt to overthrow Bashar al-Assad and wreak the plague of Wahhabi Fanatics and other mercenaries ‘down upon the good people of Syria. It’s the greatest crime America has committed in my opinion because Syria was the most advanced country in the Middle East in many ways. ISIS and  Al-Qaeda terrorists have been funded financed and trained by the United States and The US government has lied to the American people,”

Religious ideology  that intoxicate the military political class in America

Moreover, Mr. Bennett declared that he has no doubt that the current events in Iran are fermented by the US, CIA, MI6, Mossad . “US is using mercenaries and it often brainwashes these mercenaries and make them  addicted to cut off their  morals and restricts and unleash them a far beyond the land, and we have seen that this is becoming the new strategies for low intensity conflict and Ukraine Is a perfect example . The US brainwashed with the help of Israel and Britain the  Ukrainians to become Nazis, cover themselves with tattoos and engage in a war against Russia and against their families.”

He affirmed that military components used a lot of different  images and sensibilities to weaponize against soldiers  and they were convinced that they have to fight in other countries to protect their women and families. “This ideology is permeated into almost a blind religion and this is where things get quite  dangerous because you no longer have professional military experts in the US  understanding that the nature of propaganda is a tool of war. It is now becoming a religious ideology  that intoxicate the military political class in America, they believe their own lies, a self- brainwashing… Joe Biden and his government, who are inappropriate for any political position, have weaponized information against US public and foreign publics so that they can unleash this military conquest of the  world.”

Truth is the most powerful weapon in psychological warfare

Concerning how do misinformation and disinformation function in internet, Mr. Bennett clarified that there are computer system that specifically has created Algorithms using language , topics and tonality. This very advanced computer system weaponize language, imagery and locations to formulate carefully crafted paragraphs that mention just the right word at just the right time and just the right reflection point to have positive connection to check the box and say Like. For example: You want the poor Ukrainian children to live, do not you ? Yes of course and they lead them to other choices. Then vote to support Ukraine…and so on.

He commented on a question about the best and effective way to confront the PSY warfare by saying: “Truth is the most powerful weapon in psychological warfare . lies cannot stand against it , nor can deceptive bullying or aggressive commentators cannot defend against it.  Truth resonates in the hearts and minds of independent thinkers .  the alternative to main stream media (government focused propaganda) is alternative voices , platforms , and media that are speaking the opposite of the propaganda ; and showing facts and figures and examples…..As a result of cancel culture and the shutting down video platforms of independent journalists and people speaking the truth about various subjects , new platforms are rising such as odyssey rumble Radion and others….. These new mediums and new leaders rising up will be the front lines of the new information war that is evolving in America.”

The years between 1945 at the end of World War II through the early 1950s were seminal in the development of mass communication in the social sciences and psychological warfare in U.S. government.

The seeds were planted early in 1942 during the war when President Franklin Delano Roosevelt appointed Wall Street lawyer William “Wild Bill” Donovan director of the CIA’s predecessor, the Office of Strategic Services (OSS). Donovan was “among the first in the United States to articulate a more or less unified theory of psychological warfare.” He called it the “engineering of consent” with the idea peacetime propaganda campaigns could effectively be adapted to open warfare.

Christopher Simpson, the author of many books concerning the history and politics of mass media and Cold War and national security agencies, has described the term “psychological warfare” as being derived from a German word Weltanshauungkrieg (literally worldview warfare) created by the Nazis that meant a scientific application of propaganda, terror, and state pressure to secure ideological victory over enemies. Donovan understood Nazi psychological tactics as a vital source of ideas and use of the term spread throughout the U.S. intelligence community.

How US Flooded the World with Psyops (consortiumnews.com)