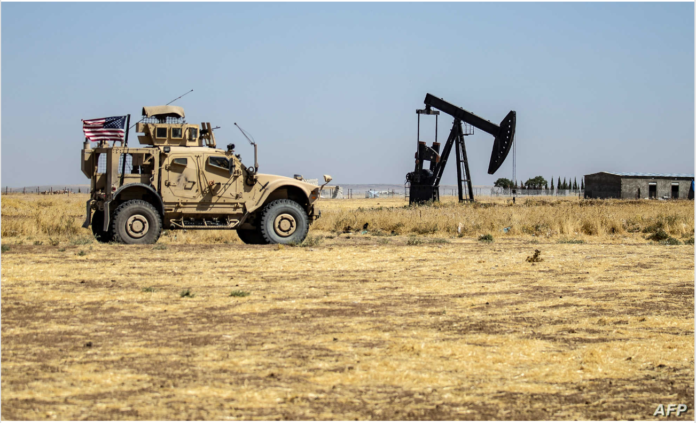 The American occupation forces stole 50 oil tanks from Syria, through the illegal Mahmoudiya crossing, in batches to their bases in northern Iraq.

SANA news agency reported that “the American occupation forces stole a convoy of dozens of tanks from the Syrian Rmelan fields, to their bases in northern Iraq.”

And local sources from the Yarubiyah countryside reported that “a convoy of 50 tankers of the American occupation, loaded with stolen Syrian oil, left through the illegal Mahmoudiyah crossing in batches towards Iraqi territory.”

During the past weeks, the American occupation took hundreds of tanks loaded with oil that it had stolen from the Al-Jazeera fields, especially the Rmelan fields, to its bases in Iraqi territory, in cooperation with the “SDF”.

The Syrian Foreign Ministry had revealed, earlier, its losses in the oil and gas sectors, as a result of the practices of the American occupation, from 2011 until the middle of this year.

It should be noted that since the US forces entered Syrian territory under the pretext of combating the terrorism of the Islamic State (ISIS) 8 years ago, their main goal was not to fight terrorism, but rather to steal Syrian natural resources.

The American forces have established military bases in the main oil and gas fields in northeastern and eastern Syria, which means that they have become in control of these vital natural resources, which has left a great burden on the Syrians to secure their oil needs from outside the country, and the American economic sanctions imposed by them have also contributed. Syria should obstruct the provision of these oil derivatives and deprive the Syrian people of them.

Last August, the Syrian Oil Ministry said in a statement that US forces were stealing 80% of Syria’s oil production.

The ministry said in its statement that the US forces and their mercenaries are stealing an average of 66,000 barrels of oil per day in Syria, where the country’s average daily oil production is estimated at 80,000 barrels in the first half
of 2022.

The ministry added that the illegal smuggling of Syrian oil has so far caused direct and indirect losses of about $107.1 billion to the Syrian oil and gas sectors.

Stolen Syrian Oil Makes Its Way to US Bases in Iraq/...