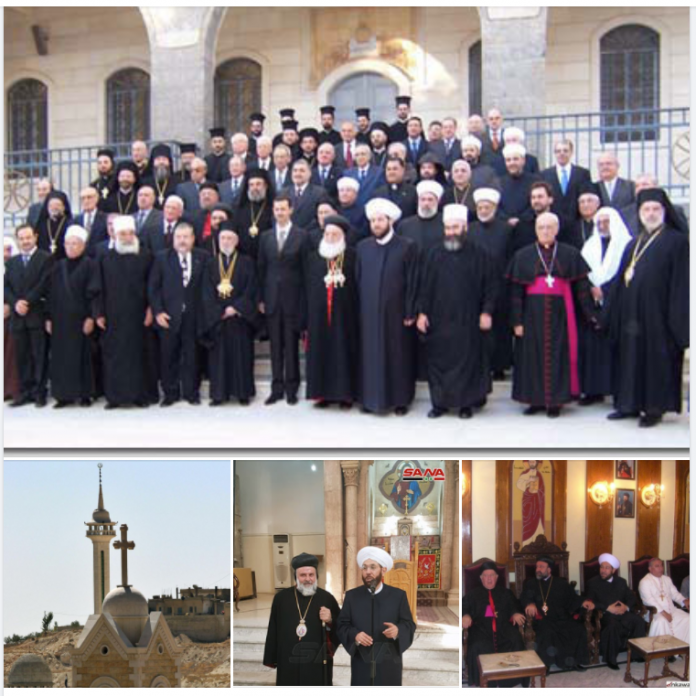 When the Syrian Christian village of Saidnaya was close to being overrun in 2013, Christian and Muslim residents joined the Syrian Army and Hezbollah to defend the town and monastery .

When Rev. Andrew Ashdown , Priest of the Church of England visited the village in 2017, the Mother Superior said to him: “When you return to England, tell them to come to Saidnaya to thank the Christians and Muslims of this town for saving this monastery and for saving Christianity in this land from the terrorists that your government is supporting.”

At the 7th Century Monastery of St. James the Persian in Qara where a community of monks and nuns have lived since 1994, the area was occupied by ISIS for 6 months in 2012/13. The monks and nuns stayed throughout and took in dozens of Christian families from the village, and sealed the doors. By night, Sunni villagers, at risk of death, brought food to the monastery. When I spent three nights there in 2015, ISIS were still only one km away, and the monastery was being protected by Hezbollah fighters.

Dozens of religious leaders and thousands of Christian and Muslim volunteers have been involved in local ceasefire and reconciliation arrangements.

The attempt by terrorist groups to impose their sectarian ideology upon Syrian society in many cases has failed.

President Bashar Al-Assad and his late father, have sought to quell communal tensions by including representation from all communities within Parliament and the leadership of the Army, and encouraging religious freedom for minorities.

Rev. Ashdown visited Syria several times before the war, and 10 times since the war began in 2011.
#Syria#Britain#ISIS#saidnaya

Did you Know?/ By Basma Qaddour