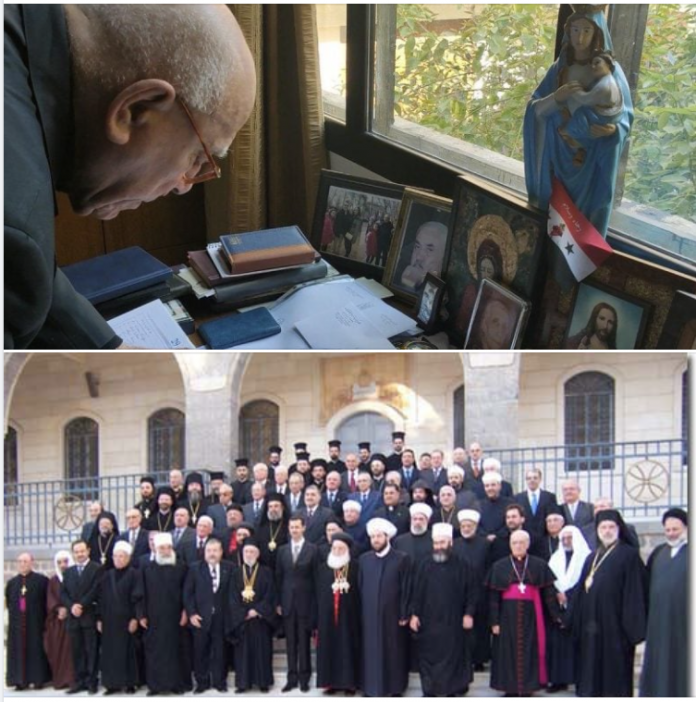 Nothing can uproot 1,400 years of coexistence as its roots lie deep in a sacred land, which is Syria today.

As a priest who lives in an Arab society with a Muslim majority and who believes that he knows Muslims and their history well, I have to say that the Western countries have created by their own hands two Moslem worlds that actually do not have anything to do with Islam. The first includes the countless Moslem communities staying in the West and which have remained until today on the margins of society. The second is the terrorist groups that the West created and used to destroy others, thinking that it will be immune from their dangers.

The period of the early Islamic conquests and the genius of Muslims has created a way to life with the Christians of the conquered countries that resulted in a blessed coexistence based on real cooperation with the population through respecting their churches, monasteries, houses, property and works. He pointed out that this coexistence has allowed all residents of these countries to live and work together.

During later centuries, this coexistence deepened and became richer. It was Christian Arab thinkers in the nineteenth century who created the idea of Arab nationalism, and a number of others in the twentieth century became founders and leaders of some influential political parties in Egypt, Syria, Lebanon and Palestine.

This coexistence forms the strong fabric of Syrian society and explains one of the deepest reasons for its steadfastness for centuries despite all the turmoil that has swept through this society until this day.

Western mainstream media were keen day and night to fabricate lies and claim that the war in Syria was a “civil war.“Then suddenly a false wave of chivalry swept the entire West led by the United States within the United Nations that ended up with the declaration of war on Syria by 140 countries and the imposition of an unprecedented siege on the country at the military, economic and financial levels.

The war on Syria is illegal and that the Syrian state, as leadership, army and people, has kept steadfast.

How Washington led the purge of Christians from its ‘New Middle East’- Part 2/ By Prof Anderson, Director of the Center for Counter Hegemonic...

Syrian Catholic Bishop: Were it not for SAA and Russia, we...