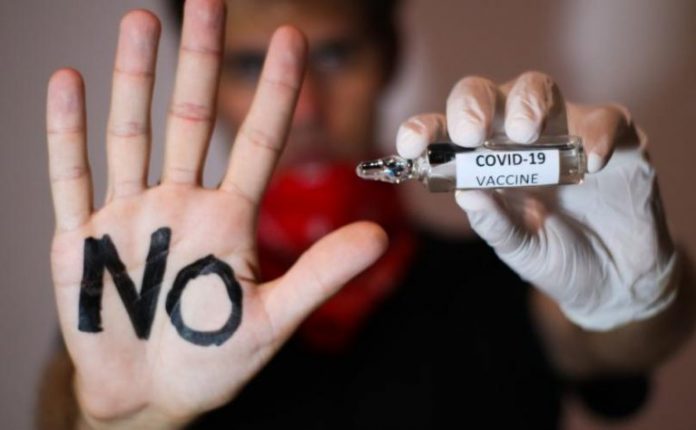 Covid’s mortality rate is about 0.07%, or less. Anything else is a lie.

Yet the steamroller bulldozes on, rolling over all the scientific evidence, and since the steamroller pays and corrupts the media, the media keep lying and corrupting people, and the governments keep corrupting, threatening, blackmailing, coercing certain vulnerable scientists into continuing with the lie despite their better knowledge.

Deceit-propaganda has no end with a narrative that is a total lie. The steamroller consists of the governments and their corrupted media, the entire UN system, in particular WHO and this powerful elitist cult, whose members are not be named, but are generally known.

This is all fact.

Repeating the “non-justification” over and over again — that it is unconstitutional, that it is illegal, that it is criminal, that it is against human rights, that it is not justified by any science that holds its ground – is useless. As only the converted will listen. While the steamroller doesn’t listen, rolls on, rolls over everything, over any opposing opinion, doesn’t even seek dialogue. The steamroller is right – by sheer crushing any opposition, and forcing them into tyranny.

Some may spread the truth. But we see what damage has already been done in the course of less than 2 years — millions, perhaps tens of millions have died — not from Covid, but from the poison that is called Covid vaccine. Yet, the steamroller ignores all that… never mentions this fact, just forces more and more people into getting the poison jab. And it rolls on over all the evidence, lying to you, to us, that’s what the very governments, elected and paid for by us, the people, are doing – all of them, all 193 UN member countries.

The few honest and transparent ones (most of them in Africa, one in Haiti), they were punished by death, through poison, by strangulation, by guns — they are to be deterrents for others, who may possibly want to follow in their footsteps and defy the Big Crime UN Agenda 2030.

This has to be said.

This has to be known by the people.

YOU must understand what is behind the false vaccination, to understand that it is much more than believing the governments nice-talk of protecting your health – all these governments have sold themselves to the devil, to hell, to say it bluntly, because they all know the true agenda behind this UN Agenda 2030, that started with the midnight gong of entering 1 January 2020 – not by accident. The vaxx agenda is a question of life and death.

No pandemic starts at once worldwide…. except when it had been prepared by a long hand before, through several publicly known events, but not disseminated by the bought mainstream media, such as the 2010 Rockefeller Report, Event 201 of 18 October, 2019 in NYC sponsored by the Gates Foundation, by Rockefeller funded Johns Hopkins School of Medicine, and by – who else – the all-commanding NGO – the World Economic Forum, the WEF.

Believe it or not, the WEF is an NGO of the elite, of the richest of the rich, of the Wall Street heads, Corporate Heads, Hollywood Heads – and some other heads. Yes, the WEF is an NGO that orders the UN to behave and to tell lies they (the WEF) want them (Guterres and his UN clan) to tell the world, and to repeat the lies over and over again.

And the real agenda is:

1) Massive population reduction – as part of the Gates, Rockefeller, Kissinger, et al eugenist agenda. That’s their number one goal. That’s why you are not getting a true vaccine, but a killer vaccine, it undermines your immune system, it results in mortality and morbidity. Deaths and injuries may occur within 2 to 3 years, so that strong believers in the vaccine, and deniers of the truth, will never accuse the vaccine, or the vaccine manufacturers, or WHO, of your or your relative’s death – that’s part of the plan, because the consequences of the “vaxx” are multiple but some of their main characteristics are:

i) the substances in the injection attack the human reproductive systems, male and female, often by cancer, miscarriages and more;

ii) they cause blood clots – that lodge mainly in the lungs, impairing your breathing capacity, but they can and often do migrate to the heart, causing heart strokes, or heart embolies, or heart attacks, or they move to the brain, where they may cause a brain stroke, or death;

iii) they may attack — and often do — your immune system through the overproduction of Spike proteins created by the “vaccine”, so you may fall for any infectious disease, that otherwise you would have resisted by your natural immune system.

2) They convert your body through the graphene oxide in the injection into a magnetic field that will respond to 5G and soon 6G ultra-microwaves’ commands, converting your brain into a computer and converting you, Humans, into robots or Transhumans, that can be surveyed and controlled by every step “it” takes – no longer you but the transhuman. If not behaving according to orders, it, the transhuman, may also be extinguished, by remote-control.

Sounds too fantastic to be true? Read Klaus Schwab’s book, “Covid-19: The Great Reset“, and watch his 2016 interview (less than 2 min) with the Swiss French TV (see also first segment in video below), where he intimates and predicts that by about 2025 humans will be chipped, so they can receive commands from 5G / 6G waves, and, he literally adds, will become Transhumans.

3) The fabricated Covid crisis is bankrupting as many small and medium and even large enterprises as possible around the globe, creating untold unemployment and misery and leaving a stock of bankrupted assets to be transferred for a penny on the dollar – or less – to the top elite, to those who are engineering the biblical crime we are experiencing since almost two years.

This is not conspiracy, these are facts, facts which we, the People, still may stop if we wake up NOW and act in solidarity.

Getting back to the beginning, where the point is made, that it is no good to keep endlessly repeating the illegality of the “Covid measures”, the unconstitutionality of the Covid passes, or the Green Passes, or the vaxx-passes, or all that is stored in the infamous QR-code, for now on your cell phone, soon to be implanted under your skin, already predicted in 2016, by Klaus Schwab.

Repeating what those of us, who do not follow the mainstream have captured long ago, is no good, unless you also explain the whole story, namely that Covid and the vaxx hoax around it, is but an instrument for a much larger agenda, of which the number one goal is massive population reduction, and you may be part of it. Knowing what the eugenists real goal is, you might faint. Let it suffice to say that their objective is reducing the world population by considerably more than half. And that beginning by the rich western world, where most unrenewable resources are used, where most capital can be stolen and transferred to the top elitist cult-clan, so that you, surviving citizen, may be happy with a basic income, that allows you to survive.

Or, as Klaus Schwab says: “You will own nothing and be Happy.”

Unless you are aware of this entire background, not only of the unconstitutionality of the fake and deadly “vaccine”, you will just roll over in your comfort zone, letting it happen, being tyrannized, without noticing – and at the end, when it is too late, you will wake up and say “nobody told me” — exactly. Doesn’t that sound familiar?  As familiar as to almost believe that Hitler’s Nazi Germany and the ensuing WWII was just a trial run for what is unfolding in front of our eyes – as UN Agenda 2030.

Be aware. We can stop it. If we want to. We are many. They are few.

We still have 9 years to go. But once you have been jabbed – you have lost a fair amount of your capacity to resist, of your autonomy, as you may die, or become incapacitated. So, don’t get vaxxed, don’t accept tyranny, don’t accept a discriminating vaxx- certificate. Say NO – to the covid crime being committed by “our” authorities upon us, the People.

And talk to the police, the military. They should also know. Because in the end, they are sitting in the same boat as we, the People, especially since their constitutional role is defending the people, not the tyrants at the head of governments. Talk to them. Peacefully – with reason. As they are also being lied to.

Featured image is from Shutterstock