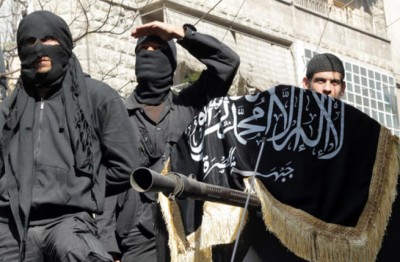 “ISIS” is a product of the US Military-Intelligence complex. The word itself connotes “ISlam”, and so from the very beginning the construct serves to create Islamophobia, which is a necessary pre-condition for the US Empire’s holocaust-creating footprint overseas[1]. War requires hatred and ISIS fits the bill. The fact that ISIS’ deeds are entirely anti-Islamic is of no importance.

Rita Katz[2] et al. beheading videos and domestic false flag terrorism all serve the necessary function of engineering consent for a War On Terror which features as its main star the West’s very own terror proxies – ISIS. ISIS itself is a false flag in the sense that whereas ISIS is the designated enemy, the psychological operation conceals the fact that ISIS is also us – they are the Empire’s foot soldiers.

In terms of military strategy, ISIS is used as a “place-setter”. Empire directs ISIS to areas that it wants to destroy – under the false pretext of going after its own assets (ISIS et al.) so that it can destroy the target area even as it relocates the “target”.

Consider, for the example, Mosul, Iraq. Prof Chossudovsky explains in “The Engineered Destruction and Political Fragmentation of Iraq”[3] that the US co-opted the Iraqi military to “allow” ISIS into Mosul in the first place — so that the city could then be destroyed, and civilians massacred, in the name of going after ISIS.  Subsequently, ISIS was relocated from Mosul to Syria.

ISIS is also being used as a “place-setter” in Syria. Similar military strategies have been deployed in the occupation and destruction of Raqqa, Syria.

Similarly, the U.S coalition is using ISIS as a “place-setter” for a proposed “Kurdistan” region.[4]

Even as Syria and its allies defeat NATO terrorism, ISIS will continue to make its presence felt in areas of the world that dare to resist the U.S Empire’s dictatorship.

All of the post-9/11 wars were sold to Western audiences through a sophisticated network of interlocking governing agencies that disseminate propaganda to both domestic and foreign audiences. But the dirty war on Syria is different. The degree of war propaganda levelled at Syria and contaminating humanity at this moment is likely unprecedented. I had studied and written about Syria for years, so I was not entirely surprised by what I saw.

All images, except the featured image, are from the author.

The assassination of Iranian general Qasem Soleimani / Commentary By Sheila...