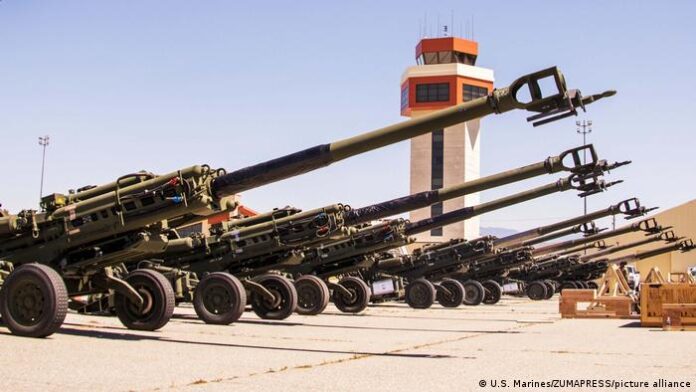 The recent Ukrainian advance was planned months ago by the US, who supplied to the Kyiv forces real-time information on Russian targets to hit: the New York Times reveals according to official sources. This confirms that the Kyiv forces are in fact under US command and are operating according to their strategy.

In this context, US Defense Secretary Lloyd Austin convened the “Contact Group defense of Ukraine” to increase arms supplies to the forces of Kyiv. The group is composed of over 50 countries: in addition to those of NATO (including Italy), Japan, Australia, New Zealand, South Korea, Israel, and Qatar. The number of weapons poured into Ukraine is such as to require a sharp increase in their production. For example, the Pentagon has provided Ukraine with about 800,000 155 mm artillery shells for the 126 long-range M777 howitzers, which are operated by Ukrainian personnel, and fire on targets indicated by US intelligence. The United States has, however, only one factory, the General Dynamics plant in Pennsylvania, which produces such bullets, but is able to manufacture only 14,000 per month. The capacity production of this plant must therefore be increased immediately and open others. Thus, a new colossal business of the military industries in the USA and in the West in general opened.

Among these industries the Italian Leonardo – the Italian Ministry of Economic Development owns the 30% shareholding – climbed to 12th place among the 100 largest war industries in the world, and in the first place in the EU. It increased defense revenues by 24% in one year, reaching approx. 14 billion dollars income. 83% of its turnover derives from the defense sector. Leonardo is integrated into the US giant military-industrial complex headed by Lockheed Martin, the F-35 builder in whose production Leonardo himself participates. Thus, it increases the power of the military-industrial complex, a sprawling organism that, in order to live and develop, needs war like oxygen.

This article was originally published on byoblu.

Ukraine: “The Americans are in Charge” of the War on the Ground 28 April 2022

Putin’s Bombers Could Devastate Ukraine But He’s Holding Back. Here’s Why 22 May 2022