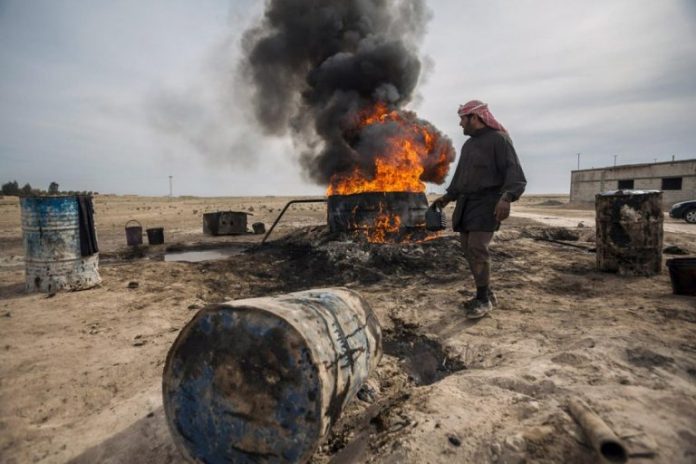 Last year,  former US President Donald Trump announced very clearly, that part of the US forces mission in Syria is to protect the oil fields and to take a share of them.

This statement was an official admission of the US forces’ plundering of Syrian natural resources in a flagrant and declared violation of international laws, which prohibit a country from stealing another country’s  property, and depriving an entire people of the benefits of this wealth.

By the end of last June, it was announced from Washington the signing of an agreement between the “SDF” and an American oil company, regarding the extraction of oil from the Syrian fields, and the US Secretary of State at the time “Mike Pompeo” didn’t hesitate to announce that the agreement came under the direct supervision of the US State Department.

Sources reported that the stealing of the Syrian oil hadn’t stopped since the beginning of the American presence in the regions of the Syrian Jazeera under the pretext of fighting “ISIS”, indicating that the quantities of oil that the organization was stealing during the period of its control over the region are now going to the benefit of the Americans with giving a part of it in favor of the “SDF”.

The source pointed out that the stolen oil convoys from the fields of Deir Al-Zour and Al-Hasakah, especially the fields of “Al-Tanak” and “Al-Omar” in the countryside of Deir Al-Zour takes several routes to transport what is looted of oil, as some of them go to the east towards the region of “Kurdistan” Iraq through the illegal Al-Waleed corridor, and it’s sold there for the benefit of the Americans, as for the share that the SDF takes from the stolen oil, it’s either sold in the areas of the Syrian Jazeera under the control of the SDF, or it’s smuggled to the areas controlled by the Turkish forces and the factions loyal to it in northern Syria despite the declared hostility between “Ankara” and the “SDF”.

The source pointed out that the theft of oil, selling it, and ignoring that it belongs to the entire Syrian people, is a major source of the continuous bleeding of the Syrian economy and a major point in the accumulation of war losses, which figures indicate that they amounted to 1.2 trillion dollars during 10 years.

The source mentioned that when it contracted with An American company, it chose the newly emerging “Delta Crescent Energy” company, indicating that it wasn’t a coincidence and that the directives coming from “Washington” ordered the “SDF” to contract with this company in particular, despite the illegality of the contract by virtue of the fact that the “SDF” isn’t a legitimate authority empowered to control the country’s wealth.

But the striking point is that the company that was selected is related to the names of 3 former officials of the US administration, and they are the former US ambassador to Denmark James Kane, the retired officer from the Delta forces in the US army James Raine, and the director of the oil executive in the company “John Durrer”, who previously worked with American oil companies in the middle east and forged relations with American administration officials, so that the company was chosen to be the main investor in the oil fields.

The source indicated that the company was allowed to carry out all activities of energy development, transportation, refining, marketing and exploration in the Syrian fields, which means that it has acquired wide powers in controlling the oil production and determining its price and the destination to which it will be exported, in an organized and publicized theft of the capabilities of the Syrian people.

Despite the international condemnation for signing the contract, whether from the Syrian government or even from Turkey, Russia and many others, the American forces continued to steal the Syrian wealth, while the rest of the Syrians were deprived of their right to the wealth of their country in the middle of the increasing living difficulties due to the economic war waged by Washington against Damascus through sanctions.

Featured image is from Mideast Discourse

Trump’s Phony Pretext to “Protect” Syria against ISIS: US Occupation and Plunder of Syrian Oil Prevails

The European Union And The Twin Civil Wars In Syria-Iraq

Is this one of those rare occasions where policymakers self-critically correct a gigantic blunder? Or is it a cold turn-about guided by pure self-interest? On August the 15th, the Foreign Ministers of EU-countries gathered in Brussels and decided that each would henceforth be free to supply arms to Kurdish rebels…

31 July 2020The original source of this article is Global Research

Russia warns Washington is sending ISIS fighters to Ukraine/ By The...