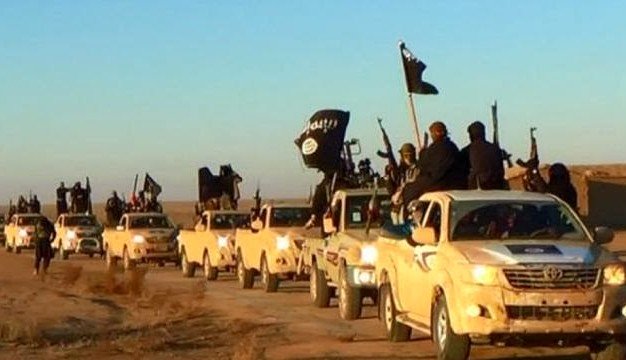 Abu Bakr al-Baghdadi, the most wanted terrorist and alleged leader of the Islamic State (ISIS-ISIL-Daesh) is dead, according to POTUS.

President Trump confirmed in October that US forces had been searching for him, that he was under surveillance. “Capturing or killing him has been the top national security priority of my administration.”

Addressing the Nation from the White House in late October 2019, “Trump said al-Baghdadi killed himself and three of his children, detonating a suicide vest as U.S. forces closed in after a “dangerous and daring” U.S.-led air raid in northwestern Syria.

Hollywood in Real Time: “I  watched the operation from the Situation Room”said Trump

The leader of  ISIS-Daesh was executed on the orders of POTUS, “leader of the Free World”.

Who is Al Baghdadi, leader of the ISIS? Is he not an “asset” of Western intelligence?

“Tens of thousands of ISIS fighters have been killed or captured during my administration.”

What the reports fail to mention is that ISIS (originally called Al Qaeda in Iraq, AQI) is a creation of  US intelligence. His whereabouts were known.

Amply documented by numerous sources as well as DoD documents, Washington created ISIS and both Obama and Trump have supported ISIS from the very outset.

Those who recruited, trained and financed the terrorists are upheld by the “international community” as the guardians of World Peace. The latter include the heads of state and heads of government of the US, Britain, France and Turkey among others. It’s called “Responsibility to Protect” (R2P).

The unspoken truth is that the “counter-terroriasm campaign” launched by Obama in 2014 against ISIS-Daesh was used as a justification to bomb both Iraq and Syria.

It was all for a good cause: install a puppet Islamic State in Damascus (modelled on Afghanistan), spread “Democracy Made in America” throughout the Middle East, confiscate the region’s extensive oil and gas reserves, transform countries into open territories…

The diabolical plan of sending terrorists into Syria as the foot-soldiers of the Western military alliance has failed. And now Trump has decided to repatriate all remaining US troops. As well as execute the ISIS-Daesh leader Al Baghdadi

“We have defeated ISIS in Syria, my only reason for being there,” said Trump in his tweet.

The US-led  counter-terrorism campaign against ISIS is “fake”, i.e. it provided a pretext to bomb and invade Syria.

The U.S. did not defeat ISIS-Daesh. It was the Syrian Arab Army, aided by Russia, Iran, and Hezbollah which waged the campaign against ISIS-Daesh.

ISIS is a Creation of US intelligence. The US led Coalition was Protecting ISIS-Daesh.

The Terrorists R US

This article below was first published in November 2014, following Obama’s 2014 “counter-terrorism” air raids campaign directed against Iraq and Syria.

Going after ” Islamic terrorists”, carrying out a worldwide pre-emptive war to “Protect the American Homeland” are used to justify a military agenda.

The Islamic State of Iraq and the Levant (ISIL) is a creation of US intelligence. Washington’s “Counter-terrorism Agenda” in Iraq and Syria consists in Supporting the Terrorists.

The incursion of the Islamic State (IS) brigades into Iraq starting in June 2014 was part of a carefully planned military-intelligence operation supported covertly by the US, NATO and Israel.

The counter-terrorism mandate is a fiction. America is the Number One “State Sponsor of Terrorism”

The Islamic State is protected by the US and its allies. If they had wanted to eliminate the Islamic State brigades, they could have “carpet” bombed their convoys of Toyota pickup trucks when they crossed the desert from Syria into Iraq in June.

In this article, we address 26 concepts which refute the big lie.  Portrayed by the media as a humanitarian undertaking, this large scale military operation directed against Syria and Iraq has resulted in countless civilian deaths.

It could not have been undertaken without the unbending support of  the Western media which has upheld Obama’s initiative as a counter-terrorism operation.

THE HISTORICAL ORIGINS OF AL QAEDA

1. The US has supported Al Qaeda and its affiliated organizations for almost half a century since the heyday of the Soviet Afghan war.

2. CIA training camps were set up in Pakistan.  In the ten year period from 1982 to 1992, some 35,000 jihadists from 43 Islamic countries were recruited by the CIA to fight in the Afghan jihad.

“Advertisements, paid for from CIA funds, were placed in newspapers and newsletters around the world offering inducements and motivations to join the Jihad.”

3. Since the Reagan Administration, Washington has supported the Islamic terror network.

Ronald Reagan called the terrorists “freedom fighters”. The US supplied weapons to the Islamic brigades.  It was all for “a good cause”: fighting the Soviet Union and regime change, leading to the demise of a secular government in Afghanistan.

4. Jihadist textbooks  were  published by the University of Nebraska. “. “The United States spent millions of dollars to supply Afghan schoolchildren with textbooks filled with violent images and militant Islamic teachings”

5. Osama bin Laden, America’s bogyman and founder of Al Qaeda was recruited by the CIA in 1979 at the very outset of the US sponsored jihadist war against Afghanistan . He was 22 years old and was trained in a CIA sponsored guerilla training camp.

Al Qaeda was not behind the 9/11 Attacks. September 11, 2001 provided a justification for waging a war against Afghanistan on the grounds that Afghanistan was a state sponsor of terrorism, supportive of Al Qaeda. The 9/11 attacks were instrumental in the formulation of the “Global War on Terrorism”.

7. The ISIL brigades were involved in the US-NATO supported insurgency in Syria directed against the government of  Bashar al Assad.

8.  NATO and the Turkish High Command were responsible for the recruitment of ISIL and Al Nusrah mercenaries from the outset of the Syrian insurgency in March 2011. According to Israeli intelligence sources, this initiative consisted in:

“a campaign to enlist thousands of Muslim volunteers in Middle East countries and the Muslim world to fight alongside the Syrian rebels. The Turkish army would house these volunteers, train them and secure their passage into Syria. (DEBKAfile, NATO to give rebels anti-tank weapons, August 14, 2011.)

10. Western military specialists on contract to the Pentagon have trained the terrorists in the use of chemical weapons.

11. The ISIL’s practice of beheadings is part of the US sponsored terrorist training programs implemented in Saudi Arabia and Qatar.

12. Recruited by America’s ally, a large number of ISIL mercenaries are convicted criminals released from Saudi prisons on condition they join the ISIL. Saudi death row inmates were recruited to join the terror brigades.

13. Israel  has supported  the ISIL and Al Nusrah brigades out of the Golan Heights.

14 The ISIL are the foot soldiers  of the Western military alliance. Their unspoken mandate is to wreck havoc and destruction in Syria and Iraq, acting on behalf of their US sponsors.

15. US Senator John McCain has met up with jihadist terrorist leaders in Syria. (see picture right)

16  The Islamic State (IS) militia, which is currently the alleged target of  a US-NATO bombing campaign under a “counter-terrorism” mandate, continues to be supported covertly by the US.  Washington and its allies continue to provide military aid to the Islamic State.

17. US and allied bombings are not targeting the ISIL, they are bombing the economic infrastructure of Iraq and Syria including factories and oil refineries.

18.  The IS caliphate project is part of a longstanding US foreign policy agenda to carve up Iraq and Syria into separate territories: A Sunni Islamist Caliphate, an Arab Shia Republic, a Republic of Kurdistan.

THE GLOBAL WAR ON TERRORISM (GWOT)

19. “The Global War on Terrorism” (GWOT) is presented as a “Clash of Civilizations”, a war between competing values and religions, when in reality it is an outright war of conquest, guided by strategic and economic objectives.

22. The US is also supporting Al Qaeda affiliated terrorist organizations in the Xinjiang Uighur autonomous region of China. The underlying objective is to trigger political instability in Western China.

Chinese jihadists are reported to have received “terrorist training” from the Islamic State “in order to conduct attacks in China”. The declared objective of these Chinese-based jihadist entities (which serves the interests of the US)  is to establish a Islamic caliphate extending into Western China.  (Michel Chossudovsky, America’s War on Terrorism, Global Research, Montreal, 2005, Chapter 2).

23 The Terrorists R Us:  While the US is the unspoken architect of the Islamic State,  Obama’s holy mandate is to protect America against ISIL attacks.

24 The homegrown terrorist threat is a fabrication.  It is promoted by Western governments and the media with a view to repealing civil liberties and installing a police state. The terror attacks by alleged jihadists and terror warnings are invariably staged events. They are used to create an atmosphere of fear and intimidation.

In turn, the arrests, trials and sentences of “Islamic terrorists” sustain the legitimacy of America’s Homeland Security State and law enforcement apparatus, which has become increasingly militarized.

The ultimate objective is to instill in the minds of millions of Americans that the enemy is real and the U.S. Administration will protect the lives of its citizens.

25.  The “counter-terrorism” campaign against the Islamic State has contributed to the demonization of Muslims, who in the eyes of Western public opinion are increasingly  associated with the jihadists.

26  Anybody who dares to question the validity of the “Global War on Terrorism” is branded a terrorist and subjected to the anti-terrorist laws.

The ultimate objective of the “Global War on Terrorism” is to subdue the citizens, totally depoliticize social life in America, prevent people from thinking and conceptualizing, from analyzing facts and challenging the legitimacy of the inquisitorial social order which rules America.

The Obama Administration has imposed a diabolical consensus with the support of its allies, not to mention the complicit role of the United Nations Security Council.  The Western media has embraced the consensus; it has described the Islamic State as an independent entity, an outside enemy which threatens the Western World.

The Big Lie has become the Truth.

Say no to the “Big Lie”. Spread the message.

The truth is ultimately a powerful weapon.

Please help us continue. We rely on the support of our readers.