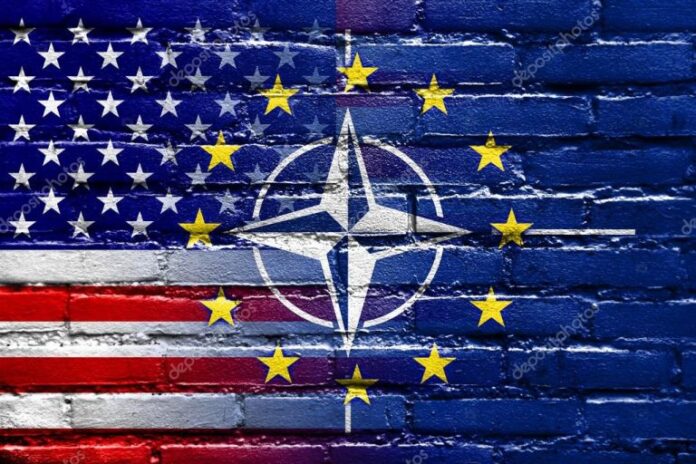 What is now happening in Ukraine has serious geopolitical implications. It could lead us into a World War III scenario.

A Bilateral Peace Agreement is required.

Commissioner Ursula von der Leyen announced that the EU is banning the Russian news agency Sputnik and the Russia Today channel so that “they can no longer spread their lies to justify Putin’s war with their toxic disinformation in Europe”.
The EU thus officially establishes the Orwellian Ministry of Truth, which by erasing memory rewrites history. Anyone who does not repeat the Truth transmitted by the Voice of America, the official agency of the U.S. government, which accuses Russia of “horrible, completely unprovoked and unprovoked attack against Ukraine” is outlawed. Outlawing myself, I report here in extreme synthesis the history of the last thirty years erased from memory.

In 1991, as the Cold War ended with the dissolution of the Warsaw Pact and the Soviet Union itself, the United States unleashed the first post-Cold War war in the Gulf, announcing to the world that “there is no substitute for the leadership of the United States, which remains the only state with global strength and influence”.

Three years later, in 1994, NATO under U.S. command carried out in Bosnia its first direct action of war and in 1999 attacked Yugoslavia: for 78 days, taking off mainly from Italian bases, 1,100 aircraft carried out 38,000 sorties, dropping 23,000 bombs and missiles that destroyed bridges and industries in Serbia, causing victims especially among civilians.

While demolishing Yugoslavia with the war, NATO, betraying the promise made to Russia “not to enlarge an inch to the East”, began its expansion to the East more and more close to Russia, which would lead in twenty years to expand from 16 to 30 members, incorporating countries of the former Warsaw Pact, the former USSR and the former Yugoslavia, preparing to officially include Ukraine, Georgia and Bosnia Herzegovina, which were already part of NATO (Il Manifesto, Che cos’è e perché è perico-loso l’ampliamento a Est della NATO, 22 February 2022),

Passing from war to war, the US and NATO attacked and invaded Afghanistan in 2001 and Iraq in 2003, demolished the Libyan State with war in 2011 and began the same operation in Syria through Isis, partly blocked four years later by Russian intervention. In Iraq alone, the two wars and the embargo directly killed about 2 million people, including half a million children.

In February 2014, NATO, which had seized key positions in Ukraine since 1991, carried out through specially trained and armed neo-Nazi-steal formations the coup d’état that overthrew the duly elected president of Ukraine. It was orchestrated according to a precise strategy: to attack the Russian populations of Ukraine in order to provoke a response from Russia and thus open a deep rift in Europe. When the Crimean Russians decided in a referendum to rejoin Russia, of which they had previously been a part, and the Russians in the Donbass (bombed by Kiev with white phosphorus) entrenched themselves in the two republics, NATO’s escalation of the war against Russia began. It was supported by the EU, in which 21 of the 27 member countries belong to NATO under US command.

In these eight years, US-NATO forces and bases with nuclear attack capabilities have been deployed in Europe closer and closer to Russia, ignoring Moscow’s repeated warnings. On December 15, 2021 the Russian Federation handed over to the United States of America an articulated draft treaty to defuse this explosive situation (The Manifesto, Russian “Aggressive Move”: Moscow Proposes Peace, December 21, 2021). Not only was it rejected but, at the same time, the deployment of Ukrainian forces began, under US-NATO command, for a large-scale attack on the Russians in the Donbass.

Hence Moscow’s decision to put a stop to the aggressive US-NATO escalation with the military operation in Ukraine.

Demonstrating against the war by erasing history, means to contribute consciously or not to the frantic US-NATO-EU campaign that brands Russia as a dangerous enemy, that splits Europe for imperial designs of power, dragging us to catastrophe.