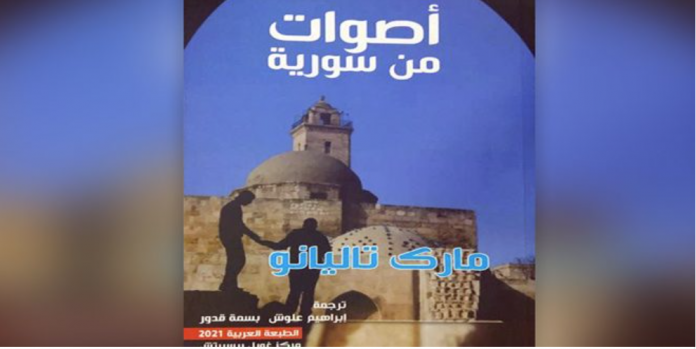 “Voices from Syria” is a documentary book written by Mark Taliano, who is a Research Associate with the Center of Research on Globalization (Global Research), and it elucidates his observations about Syria and what he has seen during his several visits to the country throughout the years of terror war on it.

Taliano has seen with his own eyes the reality that the West tries to blot out and he has debunked the lies that have been circulated by both western and Arab media outlets, which have been involved in the war on Syria.

In the expanded edition of his book, which was translated from English into Arabic by Dr. Ibrahim Alloush and Basma Qaddour, the writer combines on-the ground eyewitness testimonies from Lattakia, Aleppo, Damascus and other provinces in Syria with the aim of telling the western public opinion : “ THESE ARE THE FACTS I HAVE SEEN, AND THEY ARE COMPLETELY DIFFERENT FROM WHAT YOUR MISLEADING MEDIA  OUTLETS SAY.”

The book’s introductory section is written by the director of the Centre for Research on Globalization in Canada, Prof. Michel Chossudovsky, who underlines that everybody in Syria knows that Washington is behind the terrorists, that they are financed by the US ( at tax payers expense), and America’s allies in the region are training and recruiting the ISIS and Al-Nusra Front terrorists, while the Israeli occupation entity is harboring the terrorists.

The professor affirmed that Syria foiled the war which targeted it under a false humanitarian slogan that aimed to justify the aggression on the country, which is often described as the cradle of civilizations. He believes that should the war succeeded, there will be dangerous outcomes, especially those related to the goal of replacing secular and pluralist government by barbaric regime and chaos.

Skillfully, Taliano selected his eyewitnesses. He did not only depend on Syrian people but also resorted to convey the viewpoints of foreigners such as the American citizen Lilly Martin, who is living permanently in Syria, but she could not vote for Hillary Clinton who personally oversaw the transfer of weapons from Libya to Turkey to be used specifically by the American backed terrorists, who destroyed Martin’s own home on March 21, 2014 and beheaded her Christian neighbors, and raped the old ladies who they kidnapped and took to Turkey, and killed others, and destroyed the whole village of Kessab, Syria.

Commenting on the book, the translator Dr. Alloush told the Syrian Arab News Agency (SANA) that “Voices from Syria” addresses the western people and convey the bitter experiences of many Syrians- in their own voices- through the war during which the West used terrorists as tools besides the resilience of Syrians and their struggle against siege and economic terrorism.

Dr. Alloush sees that the writer of the book  tells the story of a gruesome case-study of a Fourth Generation Warfare in progress, its mind games, and overlapping theaters of mayhem.

“Mark Taliano agilely links this particular case-study with two important catalysts without which it cannot possibly be understood: 1) global strategies to subjugate independent states to an overarching matrix of hegemony, i.e., imperialism, 2) the dark forces lurking in the deep recesses of that matrix, i.e., international financial capital, and its links to its facades, and its regional and local proxies, be they state or non-state actors,” he clarified.

The translator in addition elaborated on how the book dealt with the topic of the role of  main steam media (MSM) in the war on Syria by saying: “ “Voices from Syria” reveals that the Western media has been used to justify the aggression on Syria and to try to topple the Syrian state through publishing and circulating lies since the 1st days of the war with the aim of saying that the Syrian state is “suppressing its people” and then reaching the point of using chemical weapons and  the so-called “Caesar Act” as well as the allegations about the West’s involvement in the war to defend human rights and Syrian refugees.”

He went on to say: “ The final goal of the Western media is to show the image of  the new Middle East Project whose axis is the Zionist entity [Israel].. Mark Taliano strongly criticized the western progressives for allowing themselves to be engineered by imperial propaganda to support policies of oppression and devastation.

For her part, the owner of the “New Dalmon” Publishing House, Afraa Hadba declared that “Voices from Syria” comes within the series of the documentary books that observed the reality of the war on Syria and its repercussions.

“Actually, “Voices from Syria”  is added to the list of the books that aim to document the reality with the framework of a cultural project launched by the publishing house,” she added.

The 212-page book explains the causes of the war on Syria and the conspiracies that have been hatched to wage the war as well as the fabricated media reports that fueled the war in order to satisfy the policies of the parties that were financing the war.

Taliano says in the last two paragraphs in his book: “ Syria is a founding member of the United Nations and a sovereign country. It has unique features that should be embraced and supported, not destroyed. Multilateralism, coupled with political, economic, and cultural sovereignty must be embraced, not rejected.”

“When Syria finally prevails against international terrorism, all of humanity will benefit. But for Syria to prevail, we all need to share the truth.”