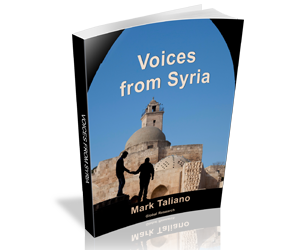 Mark Taliano is a former teacher, an activist and writer who visited Syria in 2016. Taliano interviewed Syrians who have lived under US bombs for years.

The war in Syria is a NATO war. NATO has struck Syria not just with deadly unrelenting bombing, but has maintained total media control, deceiving millions of people around the world about NATO’s bloody unprecedented multinational invasion of Syria. Taliano says, “The war in Syria is brought to you by a sophisticated network of interlocking governing agencies that disseminate propaganda to both domestic and foreign audiences.”

He interviews a woman from the US who lives in Syria. She saw the Turkish-US armed Takfiri terrorists destroy her home and the entire village of Kesseb. They raped elderly women, dug up graveyard bones and fed them to hungry dogs. In Syria, Hillary Clinton is despised because she facilitated the transfer of arms from US puppet forces in Libya to the Turkish Army who then attacked Syria. And it was Clinton who campaigned to have the NATO lies about Syria spread through Western media, calling terrorist Al Qaeda and other takfiri murderers “moderates,” as they destroyed Syrian villages, cities, and killed and maimed tens of thousands of Syrian people. She and US/NATO propagandists vilified Syria’s legitimate and sovereign government.

Taliano interviews many people, a man grateful to the Russians for coming to Syria’s aid. Another Syrian showed how calling the events in Syria a “civil war” is a lie:

“The terrorists are sent by your government. They are al-Qaeda Jabhat al-Nusra Wahhabi Salafists Talibans and the extremist jihadists sent by the West, the Saudis, Qatar and Turkey. Your Obama and whoever is behind him or above him are supporting al-Qaeda and leading a proxy war on my country.”

One of the strongest voices for Syria is Mark Taliano. He says, “Syria refuses to submit. That is why the West is taught to hate it and the rest of the world learns to love and respect it.” His friends’ testimony and video evidence demonstrate the horrors: kidnapped individuals being put in cages and used as human shields in town squares.” And still Syria does not surrender.

“The Syrian War was planned … by the US since 2005. The Syrian soldiers and police were not even allowed to carry weapons until the “peaceful protesters” had slaughtered several hundreds of police and soldiers.”

Taliano shows how US attack on the water system of Iraq in the 1990s was the template for the same illegal campaign in Syria. He duplicates one Defense Intelligence Agency document, “Iraq Water Treatment Vulnerabilities,” in 1991, which states,

Just as Iraq refused to bow to the will of the US, Taliano writes,

“Syria insists on choosing its own path and refuses to be a vassal of US-led forces of predatory capitalism that siphons the world’s resources for the benefit of a transnational oligarch class. Violating international law, NATO countries have been involved in this blitzkrieg “regime change” invasion of sovereign countries.”

Mark Taliano gives journalists, Syrians, and Facebook contributors credit for unmasking the truth. He cites Stephan Gowans who notes that the economies of all the countries the US/NATO has invaded have had a largely publicly-owned economies. He cites Vanessa Beeley, Michel Chussodovsky, Eva Bartlett, Dr Shaabban, Ghali Hassan, Katherine Shackdam, Tim Anderson, and other courageous journalists reporting the NATO genocide.

“Total deaths from Western interventions in Iraq and Afghanistan since the 1990s…likely constitute around 4 million (2 million in Iraq from 1991-2003, … and could be as high as 6–8 million people when accounting for higher avoidable death estimates in Afghanistan.) …. US and UK “’refuse to keep track of the civilian death toll of military operations – they are deemed an “irrelevant inconvenience.”

In addition to mass murder and destruction of food, health care facilities, schools and homes, in addition to the trail of destroyed archaeological treasures from Ancient Syria, Taliano notes:

“Criminal mainstream messaging has created a state of mass political imbecilization,” stupefying the masses with lies.” They codified the deception. The US House of Representatives passed HR5181 ‘Countering Foreign Propaganda and Disinformation,’ “which calls for countering any “disinformation” – the truth – that escapes from Syria. The US funds “Civil Society” groups to do official disinformation work. The “National Endowment for Democracy, the CIA, Mossad, etc., as well as oligarch-funded foundations, are all embedded with the terrorists … are the sources … for corporate/mainstream media “news” stories.”

“The Wahhabi terrorists destroyed Syria by destroying everything in Syria like factories, like anything working to build the culture. And they’re supported by America and the European governments.”

Voices from Syria is a small book with a big message. It would be perfect to use in a group of concerned activists meeting to discuss and disseminate the truth about US or NATO foreign policy in Syria. . It could be used in a classroom or in a library reading club.

Mark Taliano is from Canada, one of the reliable military vassals in the NATO cabal. He severely criticizes his own government’s crimes, and the crimes of the ruling class who have urged their imperial forces to overthrow the legally elected government of Bashar-Al Assad. US and UK and Canada openly provide military and economic support for AlQaeda, Al Nusra, and the terrorists. The oil-rich rich monarchies of Qatar, Saudi Arabia, and Abu Dhabi -finance and arm the puppet armies and death squads attempting to destroy Syria’s sovereignty.

Mark Taliano is a passionate voice for peace, dispelling lies, urging solidarity with the people of Syria.

“Whereas the West supports the extremist Wahhabism of Saudi Arabia, the teachings of Islam contradict this ideology, and they certainly contradict the crimes of the mercenary terrorists infesting Syria.”