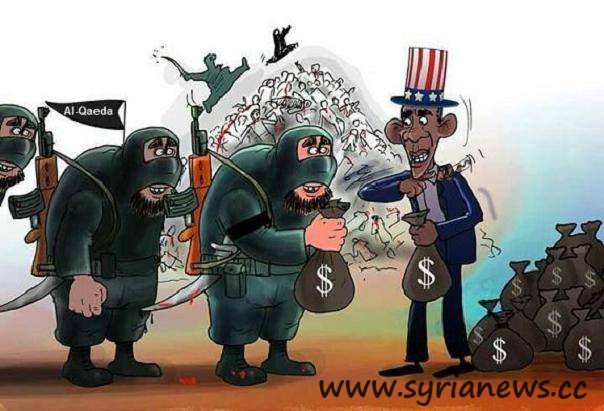 The Obama regime insists on further fooling their ‘foolable’ citizens by claiming they’re aiding a ‘Moderate Rebels’ faction against terrorist organizations like ISIS, and against the government of Bashar Assad in Syria, which the ‘global legitimacy distributor’, the Obama regime, decided it lost its legitimacy.

By doing so, the Obama regime intends to steal furthermore money from its own citizens, turning all taxpayers in the US to willingly killers, converting large numbers of them after training them into killing mercenaries, then turning hundreds of thousands of people in targeted countries into enemies for the US people and their children for centuries to come. Why? Just to assist the group of foreign Zionist settlers into more land grab from real owners and to follow the route towards the emerging of the anti-Christ. If you think this is some kind of conspiracy theory, you have all the history books to read and you have all the news to watch, from all sources not only your regular ones, and you have all events to analyze.

‘Moderate Rebels‘, the term, means there are ‘rebels’ to start with. Rebels against who? Against an establishing member state of the United Nations that has never posed any threat against the United States or any of its real allies? On the contrary, Syria was the only one nation cooperating sincerely with the rest of the world to fight extremism while US’s main allies were nurturing extremism to the extent they contributed in direct attacks against the US. 9/11 terror attacks is a good example, the attack on USS Liberty is another, and many others.

Let’s take a look at a sample of the ‘Syrian Moderate Rebels‘ to understand their composition:https://videopress.com/embed/bWO99dmy?preloadContent=metadata&hd=1(Watch on BitChute: https://www.bitchute.com/video/FIBhcBCHoq93)

Here are some of the achievements of the ‘moderate rebels‘ the Obama regime insists on arming, training, financing and politically sponsoring, and the following list is just a tiny collection of horrific acts carried out by these ‘moderate rebels’ in the name of the US citizens and only in Syria in the past 4 years:

1- Jisr Shoghour Massacre: The first Jisr Shoghour massacre, if we can count, was committed when the western mainstream media was still insisting that peaceful protesters carrying roses were being shot at by the Syrian government security forces. In early June 2011, thousands of heavily armed terrorists, some of which were airlifted from Iraq into Turkey and smuggled into Syria through the borders of Idleb province over 3 days, were gathering in the border town of Jisr Shoghour, the head of the state security post in the town called on all government forces to take shield in the state security building, around 125 of them fought back and withstood the attacks until their final bullets. They were brutally massacred afterwards, their bodies were lynched dragging some of the bodies by motorbikes throughout the city by the ‘moderate rebels‘ most of whom were not even Syrians.

2- Killing of Nidal Jannoud: The first of its kind sectarian crime that came to the public attention when a group of armed ‘moderate rebels’ or ‘peaceful protesters’ kidnapped a young married man Nidal Jannoud, while he was delivering vegetables in the city of Baniyas, and paraded him through the city streets while stabbing him alive with their daggers until he fell dead. Details here: http://democratic-syria.blogspot.com/2013/03/misleading-media-on-syria-shaping.html.

3- The assassination of top Islamic Sunni cleric Sheikh Saeed Ramadan Bouti, 84 years old and 51 of his Sunni followers inside a mosque in the heart of Damascus while in a Quran teaching lesson and they still tell these are Sunni against Shiites (Shias), no these are anti-Islamic Wahhabi death squads against Muslims. http://democratic-syria.blogspot.com/2013/03/misleading-media-on-syria-shaping_29.html

7- Destroying the National Hospital in Homs.*

9- Hatla Massacre. June 2013 – A group of ‘Moderate Rebels‘ led by a Kuwaiti anti-Islamic Wahhabi takfiri terrorist massacred more than 60 civilians in the countryside of Der Ezzor, just because they were Shiites. Further details: http://syrianews.cc/alert-nato-false-flags-increase-syria-massacres/

10- Jandar Massacre: August 07, 2012 – This time it was Christians targeted by a group of ‘Moderate Rebels‘ in the resort of Jandar near Homs, central Syria:https://videopress.com/embed/kO6aEWzl?preloadContent=metadata&hd=1

11- The execution of the elders of Berri Tribe: July 2012 ‘Moderate Rebels‘ attacked the houses of the Berri tribe in Aleppo countryside, kidnapped the elders of the tribe, took them to the ‘Moderate Rebels‘ quarters, tortured them before cameras then killed them with thousands of bullets, watch the hatred and this crime against humanity paid for by US Taxpayers:https://videopress.com/embed/Txm4XxyK?preloadContent=metadata&hd=1

12- al-Bab post office crime: August 2012 – This is not a lone crime of its type, ie throwing people off rooftops, we saw a similar crime in Egypt by the Muslim Brotherhood followers, but this one in Syria was the first but not last when herds of ‘Moderate Rebels‘ stormed al-Bab city north of Aleppo, and during their acts to ‘promote democracy’ in this city, they headed to the post office, forced the workers to the rooftop because they work for the ‘Obama labeled lost legitimacy regime’ and threw them one by one off the rooftop. Here’s a side of the massacre crime to please the US citizens and their allies to what their money and support can do:https://videopress.com/embed/z6dUi2Rn?preloadContent=metadata&hd=1

13- Assassinating policemen and conscript soldiers: An example from the al-Bab area, Aleppo:https://www.youtube.com/embed/2QUrhlmZzQY

15- Here’s one of their ‘female interrogators‘ from the same ‘Free Syrian Army’ the Obama regime created and still insists it’s a ‘Moderate Rebels‘ group:https://www.youtube.com/embed/iVb6FLz8dPA

Not to mention the infamous Abu Saqqar, the freak fanatic who carved out the heart of the dead soldier and ate it before the camera, he was a main commander in the al-Farouq Battalion, the largest branch of the ‘Moderate Rebels‘ the FSA.

Of course, we didn’t touch on the random mortars falling on residential neighborhoods, the suicide bombers blowing themselves up in markets, in front of schools and even Sunni mosques. Blowing up and destroying historic priceless ruins and monuments…..

The above as I said are just a tiny fraction of samples of what crimes committed by the Western sponsored ‘Moderate Rebels‘. And don’t ever claim you didn’t know who you are supporting.

They get their orders from fanatic freaks residing in the US best ally Saudi Arabia like this anti-Islamic Wahhabi cleric called Adnan Arour, watch carefully his instructions:https://www.youtube.com/embed/yzGFPhjTHt4

Top anti-Islamic Wahhabi Saudi cleric, head of the Saudi judicial council calls on killing 1/3rd of the population to please the other 2/3rd!! In the case of Syria, he allowed the killing of 7 million Syrians out of the 21 million population:https://www.youtube.com/embed/EmYAhEsVcSA

Now when you pay your tax money or when you go to the election, remember how many you’ve already contributed in killing and how many more you will kill with your tax money and remember also those you elected to represent you how they have done their ‘job’ and you’re quiet about it.

* check the first comment for samples of destroying hospitals in Syria to promote democracy and free speech.