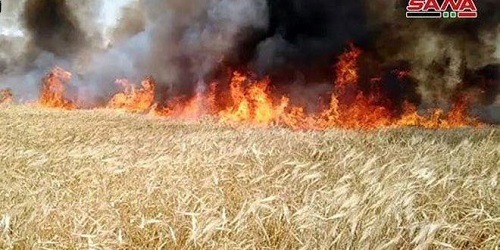 The Syrian people have been fighting multinational terrorism in defense of the entire globe. Yet, many big powers seem to have nothing to offer them except sanctions, threats and exploitation.

The USA and its satellite EU seem in competition as to prolong the Syrians’ suffering through illegal coercive sanctions and blockade.

Unfortunately, such inhumane measures against Syrians add but salt to their bleeding wounds during more than 9 years of terrorism war, not to mention poor economic conditions and COVID-19 pandemic.

Mr. Trump, who opted to leave WHO and threatened to deploy the U.S. National Guard with shoot-to-kill orders against unarmed people in Minneapolis, is adding too the more of recklessness to his policies towards Syria.

Instead of withdrawing his occupation troops from Syria, he is massing up more occupation boots on the Syrian ground! Furthermore, the US president has recently ordered Apache helicopters of the US occupation forces to drop ‘thermal balloons’, an incendiary weapon, causing Syrians’ wheat fields to explode into raging flames!

The US illegal bases in Syria fly Apache helicopters. US President Trump who portrays himself as a champion of the American Christians seems to forget that the Bible states in Deuteronomy 20:19 that it is a sin against God to destroy food or food crops even during times of war.

Bread is the most badly needed for and used in Syria. In the aftermath of such barbaric Apache attacks, wheat production is to drastically fall as to cause the more of food insecurity and shortage.