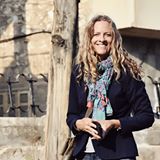 This area has come under sustained and heavy attack in the last few weeks as the Syrian Arab Army have begun the military campaign to liberate West Aleppo from the terrorist siege that has been in place for 8 years.

Manal is an amazing woman, full of energy, fight and passion. Her two boys, Ghaith and Laith, are a testament to her determination to survive and to continue their lives as normally as possible – to keep their dreams and ambitions intact even though the terrorists would love to see them shattered.

She and I both laugh when she points out that we are standing in a triangle of sniper positions and that just behind me is a street “where nobody walks” because this sniper is deadly – others will only maim for sport rather than shoot to kill, aiming at legs and arms, especially picking on schoolchildren. Black humour in a war zone becomes commonplace, it is a survival mechanism.

Manal tells me that these terrorists are not “moderate rebels” as described in the West, they are monsters who prey upon civilians. She says that she would not be able to live among them as a woman, they would stop her working and force her to stay at home “like a slave” – living in the government protected areas, she has all her rights, she can work, go out at night, she is free.

I dont really know how many more interviews like this people in the West need to see before they wake up to the endless stream of lies they are being fed about Syria, China, Iran and many other target nations and peoples- the media has always lied and it will always lie because that is its job. We need to stop believing that those who work within the machine have any semblance of conscience – they abandoned it the moment they started to sell wars for profit on behalf of the ruling classes.

Syria needs these voices to be heard and for people in the West to rise up against war, against siege warfare, against economic punishment for people who don’t deserve to die, to be mutilated, raped, abused, kidnapped, tortured, starved and driven into poverty without electricity, gas, oil, water or bread.

This is not a “humanitarian” war as you are being led to believe, you are not “saving” the people from a “dictator”, you are ensuring they are murdered in their sleep and reduced to beggars in the streets, homeless and bereft of their dignity, their most basic needs – living under the occupation of the “moderate rebels” and subjected to all kinds of abuse.

Please wake up before another country suffers the same fate as #Syria who has resisted this inhumane campaign for nine years – they deserve an end to this hell.