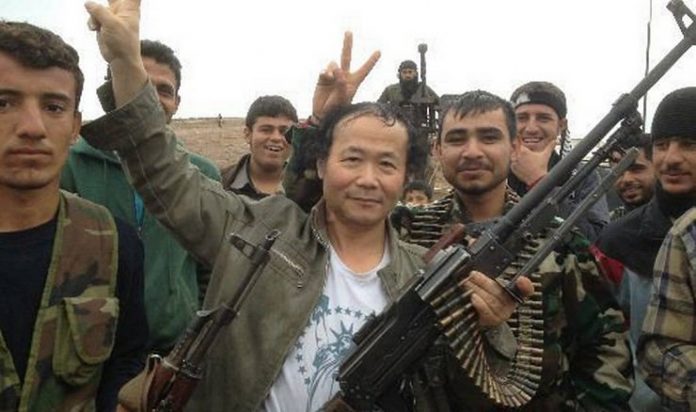 It’s now universally acknowledged that public support for the Iraq war was based on an ignominious lie, a fallacy deliberately constructed within the public imagination by the imperial command system that Saddam Hussein was developing weapons of mass destruction. The mythos was the consequence of a multi deep-state ops supposed to swindle the masses into believing Saddam Hussein represented an immediate existential threat to the West that could only be contained by military action, military action conspicuously consisting in the presence of more corporate contractors than actual fighting soldiers for the first time in the history of war.

Today we are seeing the same strategies of disinformation being deployed to isolate and destroy an ascendant socialist China and leftists in the imperial core are once again being influenced by propaganda, uncritically, unthinkingly regurgitating Orientalist tropes about the barbarity of the Chinese regime. To defend the life of the mind against its debasement at the hands of imperialist propaganda those on the left must put in the hard work of methodically, sceptically examining the articles of faith the establishment manipulates us into swallowing about China.

The lynchpin of the Western propaganda effort against China is the myth of the Uyghur genocide, a lie serving as justification for a long planned war against China, which, as the biggest threat to US geostrategic hegemony, is a target for neutralization, and the propaganda is deeply, darkly manipulative, weaponising people’s innate sense of humanism against them.

A dispassionate study of the data, statistics and eye witness testimonies from Western dissidents who have studied the Uyghur culture suggest there is no genocide to speak of. Nevertheless, a moral panic has taken over Western politicians and media following a high profile Washington funded propaganda campaign. Claims of “millions detained” came from a Washington backed NGO, the Network of Chinese Human Rights Defenders, who interviewed only eight people before jumping to rash conclusions about what was happening to a population of twenty million. CHRD boasts significant donations from the National Endowment for Democracy, a Washington regime change outfit which has its claws deep in the far-right discourse on the “need” to turn China into a Westernized client state.

Claims of “millions detained” were given more oxygen by Adrian Zenz, a far-right evangelist who serves as a China specialist at an anti-communist institute established by the US government, a religious zealot who once claimed that God had ordered him to fight against China.

Perhaps unsurprisingly given the abhorrent standards of western media, he is being treated as a serious authority on Chinese politics rather than the deluded, apoplectic liar he is, testifying to congress and becoming the go to pundit on Xianjing. The Victims of Communism Memorial Foundation that Zenz works for is a descendent of the National Captive Nations Committee, a far-right nationalist organisation in the Ukraine which sought to stop detente with the Soviet Union. Yaroslav Stetsko, its co-chairman, boasted rank in a fascist militia that collaborated with the Nazis during their occupation of the Ukraine and went on to set up the World Anti-Communist League, a festering void of anti-semitism and neo-nazi sympathies that is attempting to whitewash history by rewriting it to put the legacy of Communism on a par with Hitler.

In the run up to Iraq, Blair, suzerain of the UK Parliament, relied on a “dodgy dossier” concocted by his principal spin doctor Alistair Cambpell which plagiarised parts of a PhD thesis and selectively presented the facts to suit the narrative that Saddam harbored weapons of mass destruction posing an immediate existential threat to the West.

Zenz has his own “dodgy dossier”: Sterilizations, IUDs, and Mandatory Birth Control: The CCP’s Campaign to Suppress Uyghur Birthrates in Xinjiang, in which he argues that the CCP are systematically suppressing Uyghur birthrates. Far from being isolated and attacked by a CCP policy steeped deep in repressive biopolitics the Uyghurs benefit from access to a wealth of family planning clinics and family planning resources supplied by the Chinese state for all citizens.

That the Western politico-media establishment gives an indomitable platform to such ethically dubious figures as Zenz shows that the verities of “liberalism” today, of which the myth of the Uyghur genocide is one, lack academic integrity. Zenz is merely an avatar of a fascistic US empire, a 2-dimensional cardboard cutout villain who makes an industry out of lying. One of the main aims of the massive psyops against China is to repress knowledge that the regime is making historic progress in bringing millions of people in and beyond China out of absolute poverty, therein distracting people from the fact neoliberal capitalism isn’t working. Another aim is to inculcate a revisionist history that wrongfully attributes genocidal intent to communist regimes.

Beyond the fact that the “millions detained” lie stems from agencies of the empire state, it’s also true that the “concentration camps” emotively referred to by western politicians are really educational institutes aiming to rehabilitate extremists so they can learn the skills to peacefully coexist within Chinese society. Uyghur separatists have joined forces with violent, murderous terrorist groups in the middle east and pose a severe threat to the safety, coherence and stability of Chinese society. The “concentration camps” are really a humane attempt to re-educate those mis-led by extremist philosophies.

“The Cruise Missile Left”: Samantha Power and the Genocide Gambits

This article written nine years ago in May 2004 brings to light the position of so-called “Progressives” which Edward Herman describes as “The Cruise Missile Left” pertaining to  humanitarian intervention. The word “genocide” is often used to describe crimes committed by countries which are the victims rather than the perpetrators…

The threat of war against Iran is not just about its natural resources, strategic control and supposedly to protect Israel, it is also about the US dollar being used for its oil trades. Iran is moving forward to replace US dollars for its foreign trade with Russia in rials and…

So Please Tell Me Again: What’s the War About?

When facts are inconvenient, when international law, human rights and history get in the way, when war crimes can’t easily be justified or explained away, when logic doesn’t help much, the current crop of American political leaders turns to what is now the old reliable: 9/11. We have to fight…

China vs. the WHO. “The Virus did not Originate in China”. The WHO was an Initiative of the Rockefellers

“Admission Against Interest”: The West Supports Uighurs To Destabilize/Destroy China.

Australia Is Now A Totalitarian Regime/Commentary by Christine Anderson of the...

Twenty-two Years Ago: NATO’s War of Aggression against Yugoslavia: Who are...

China vs. the WHO. “The Virus did not Originate in China”....

The real truth on Uyghurs which is used to taint China/...