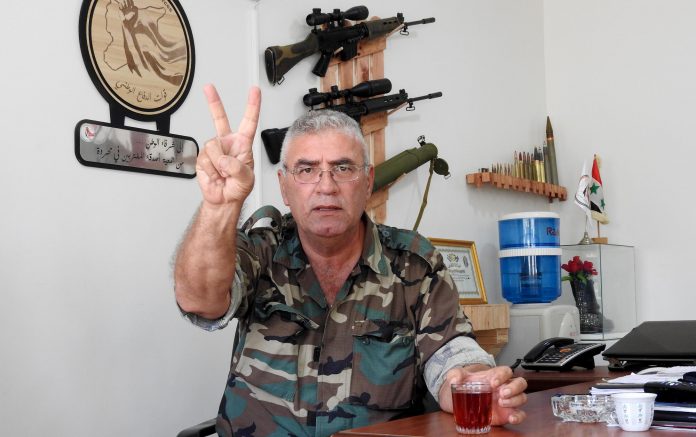 Heroes of #AlSqeilbiyyeh and #Mhardeh National Defence Forces are coming under attack from terrorist media outlets since they carried out cleansing operations in the Hama region, close to Salamiyeh – operations that included the removal of mines and IEDs left behind by #ISIS.

Commanders, Nabel Alabdalla and Simon Al Wakil are no strangers to menaces and threats from the extremist armed groups that would see #Syria ruled by sectarian gangs and Christians driven from the holy land. Both have been injured many times in the battles for the liberation of their homeland from internationally-sponsored mass-murdering mercenaries. Both have fought in fierce battles elsewhere in Syria during the 10 year war.

The recent spate of articles published on Saudi or Qatari-funded sites such as Orient have portrayed both leaders as “Shabiha” (government militia). These articles have tried to present a false narrative that President Assad is employing these volunteer forces to increase sectarian divides in the country.

Nothing could be further from the truth. Every one of these volunteer fighters sees themselves first as SYRIAN, secondly as their faith. Both Nabel and Simon are embracing of all communities in Syria, extending help and shelter to refugees who have fled #Idlib, for example, welcoming them into their towns and offering work and support.

Reality is that the countries who sponsor these media outlets also sponsor the terrorist gangs roaming Syria before, now contained largely in Idlib. Of course they will lash out at those responsible for the defeat of their “regime change” plans and the liberation of Syria from the threat of their medieval, dark-age-ideology.

Christians in Syria would not exist now had President Assad, the Syrian Arab Army and allies not protected them and supported their self-defence campaigns. The terrorist groups led by Al Qaeda would love to see Christians of all denominations driven from the region.. reducing the war to a sectarian bloodbath, reduced down to “Sunni vs Shia” as portrayed by the mendacious US Coalition media.

The Syrian state, all faith leaders in Syria are well aware of this campaign and they have united behind the secular state to prevent the tearing apart of the fabric of their society.

I know Nabel and Simon very well, they are dear and humble friends without whom, these two towns would have been captured and civilians very probably massacred a long time ago… they are heroes, their soldiers, men and women, are heroes. Anything that tries to smear or discredit what they have done for their country, their people, their Army and their President is slander and lies.