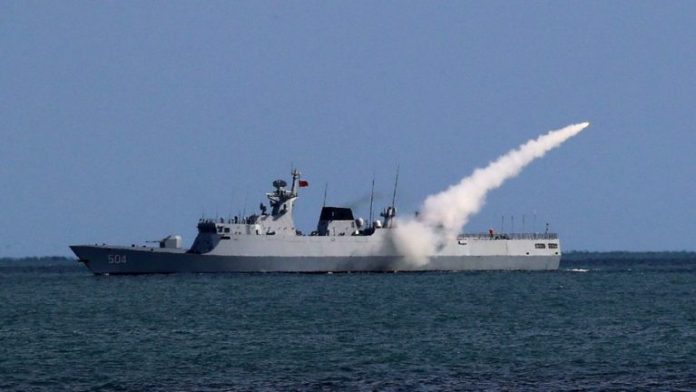 US forces are deployed in parts of the world not its own to wage forever wars by hot and/or other means against nonbelligerent nations threatening no one. That’s how its imperial scourge operates, an unparalleled threat to everyone everywhere.

In recent years, they’ve been increasing. The latest SDSPI report discusses US military operations in 2020.

According to Hu, dual US carrier group/warplanes exercises were “combat-oriented.”

“For example, the USS Ronald Reagan carrier repeatedly moved into and out from the South China Sea fast, and coordinated flank attacks with other carrier strike groups.”

“Second, US carriers operated in a wider area.”

“Third, the dual carrier exercises were also pointed ones, as they were conducted at a sensitive time coinciding with exercises by the People’s Liberation Army (PLA) near the Xisha Islands and the Han Kuang exercises by the military on the island of Taiwan.”

All of the above and more are unjustifiably justified by so-called Freedom of Navigation pretexts.

They’re all about rehearsing war on China, notably by operating near its Xisha and Nansha islands, Taiwan, and waters near China’s mainland — what the SCSPI’s report called “sensitive areas,” including near PLA military facilities.

READ More: The Unthinkable: Is a US-China War Possible? US War Ships in the South China Sea. A New Era of “Great Power Competition”

According to Hu, they increase the risk of “misjudgment” between PLA and Pentagon forces.

In 2020, the Pentagon conducted provocative “high frequency” island or reef-trespassing operations in the South China Sea, including transits through the Taiwan Strait 13 times.

So-called gunboat diplomacy is a longtime US belligerent practice.

Looking ahead, Hu believes that Biden regime hardliners will maintain hostile political, economic, and saber-rattling actions against China — heightening regional tensions instead of easing them.

While continuing “maximum pressure” on China, “the US is gradually losing such military dominance in the Western Pacific despite its evident military superiority globally, as China has been delivering much more targeted and effective countermeasures,” the SCSPI stressed.

What US hardliners call Chinese “threats and challenges” are invented, not real.

Pushing Beijing politically, economically and militarily risks confrontation by accident or US design.

What’s unthinkable is possible because of US rage to rule the world unchallenged by whatever it takes to achieve its imperial aims.

Neither China nor Russia — or any other countries on the US target list for regime change — hold provocative military exercises off its east or west coasts or in gulf waters near its southern coastline.

If done, both wings of the US war party would consider them a casus belli and likely respond belligerently.

According to Blinken’s spokesman Price on Friday, “(w)e will certainly not pull any punches in discussing our areas of disagreement” — describing bilateral relations as “competitive (and) adversarial.”

Stephen Lendman is a Research Associate of the Centre for Research on Globalization (CRG).

External forces’ intervention in the South China Sea disputes has gradually become a reality despite China’s opposition against the externalization of the disputes. Last week, the US and Japan reached a new agreement on the joint use of the US military bases in the Pacific region. According to media reports,…

China is Not Leaving the “South China Sea”

17 March 2016The original source of this article is Global Research

Another War? History of US-China Relations. The One China Policy and the 1972 Shanghai Communiqué/ By Sara Flounders

“Preemptive Nuclear War”: The Historic Battle for Peace and Democracy. A...