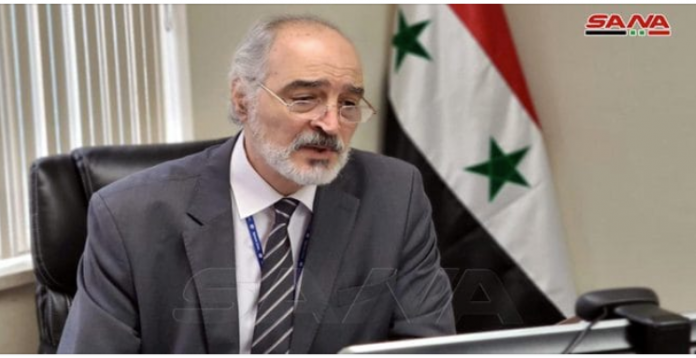 Some Western Governments still refuse to repatriate their terrorists, together with their families and children -and here we are talking about 72,000 terrorists and future terrorists located in one camp under the supervision of the American occupation forces and their proxy separatist militias.

These very same Governments consider terrorism a legitimate tool in which to invest as long as it does not target their countries.

The Belgian Government- which shares with Germany holding the so-called humanitarian pen and claims to be concerned about the humanitarian situation in my country – refused to take back the Belgian wives of ISIS fighters, and was content with expressing its readiness to receive children exclusively under the age of ten, despite the decisions issued by the Belgian judiciary demanding that children not be separated from their mothers. What hypocrisy is this?

A number of terrorist members of the “White Helmets” and “Hayat Tahrir al-Sham” terrorist organizations, under the supervision of some Turkish officers, are working to prepare for the commission of a new chemical crime in the upcoming days in the city of Ariha and the Bassamis area in northwestern Syria.

They have also prepared the crime scene, kidnapped a number of children, prepared some of the hostages and detainees to use them in their crime, in order to lay charges on the Syrian Arab Army and provide the pretext to openly occupy the city of Idlib and its countryside, and target all Syrian airports.

When it comes to the US Administration’s claims of support for a peaceful political solution to the crisis in my country that is facilitated by the United Nations, does such a hostile American position directed against the head of a Member State of this organization make any sense at all?

The UK has incarnated the spirit of the Sherlock Holmes instead of taking Shakespeare’s wisdom into heart and follow his ethical advice that is good for all times and places. It is not enough for a man to weave a story full of lies, misleading and prejudice. Rather, what is required is that the story be real, beneficial and that it provides logical solutions for absurd scenarios.

The history of British politics is not something to be proud of nor is it anyone’s role mode. The present times confirm that history, particularly when the public recently took to the streets in British cities destroying the statues of slave traders who kidnapped millions of innocent Africans from their homes and transferred them in the journeys of utmost torture to the American continent. The most prominent of these British traders of torture is Edward Colston, whose statue was toppled down in Bristol city, just a couple months ago. So please, stop preaching others and learn from your own history.#syria#US#Britain#Terrorism

ISIS terrorists confess that they have carried out many operations in...