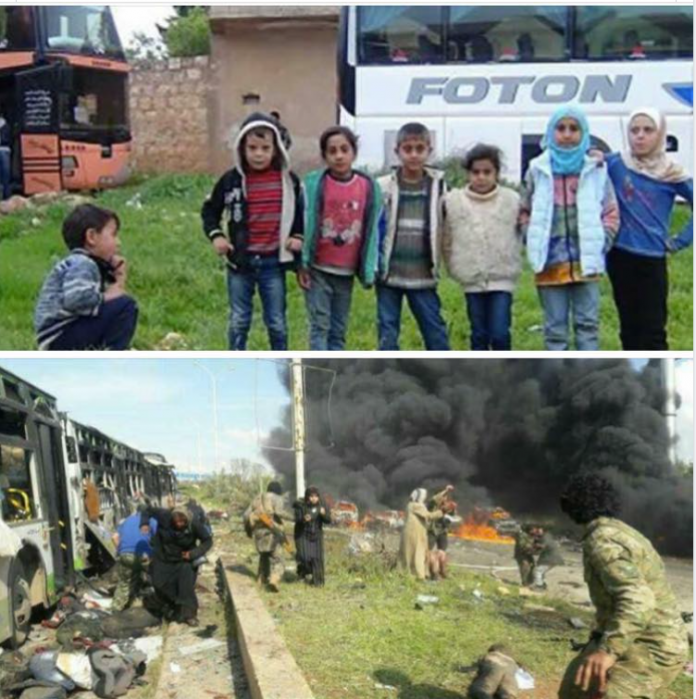 120. 120 children from Kefraya and Al Foua among 175 killed by western-Backed terrorist “rebels” near Aleppo, Syria a year ago.

Yes you are reading this correct.120 starved children were burned to death by a suicide bomber after “moderate rebels” managed to lure as many as they can using potato crisps.

For 5 years under siege by the Jihadists, those children were suffering from starvation and continuous terrorism. Until they got on those buses thinking they survived the horror.

Little did they know about the fact they were being driven to their slaughter. But how could they not know when the “revolution” started with slogans calling for the extermination of the “likes of them” because they are a religious minority. When Al Jazeera Arabic presenters described them as “Shia parasites” in a “sunni region”. When CNN called the attack against them a “hiccup”. When AJ+ mislead the masses into thinking they were killed by the Syrian government while escaping the government and used the children for propaganda to hide the truth about their misery and identity. When the world was silence for 5 years neglecting the severe starvation, the car bombs and the missile attacks those besieged children had to go through.120 children. 120 dead children and dozens more wounded.

Yet no outrage, no tears, no profile pictures, no blames, no protests, no solidarity, no candles, no nothing.That day you all have proven that you have no hearts. You are all weak. You are Nothing.You are nothing more than machines for the western led media. You only feel when they want you to feel. You only react when it’s a “trend” to react. None of you actually care.

For the hypocrites who cried Chemicals and starvations. Here’s what happened in Syria on 15 April 2017. If you really care:

When the uprising started in 2011 in Syria some of the main slogans used by the “revolutionaries” in some areas were:

“We will slaughter the shia in Kefraya and Al-Foua” along side “Christians to Beirut, Alawites to the grave”.Kefraya and al-Foua, 2 Syrian Shia villages besieged in Idlib by terrorist “rebels”. For years thousands of trapped civilians in the province of Idlib suffered from starvations, terrorist attacks and attempts of cleansing by anti-minorities radical Islamists, also known as the “moderate rebels”.Kefraya and Al-Foua were Used by the terrorist rebels led by Al Qaeda-linked Al Nusra as a pressure card to force the Syrian Army out of other areas where the terrorist militants were surrounded by Government led forces.

Civilians in those areas were starved by the rebels to blame and pressure the Syrian Government.

Since 2015 dozens of children were killed in the Shia-majority towns due to continuous missile launching, car bomb attacks and severe malnutrition caused by the rebels blockade.

A year ago the terrorists agreed to evacuate 8000 civilians from Kefraya and Al-Foua under a deal reached between their western-Qatari sponsors and the Syrian Government. As usual the radicals violated the agreement and only 5000 civilian were allowed to leave. The terrorists also did not allow the Shia civilians to be evacuated to Government held region where all Syrians of all sects and religions live in peace, but wanted them to be placed in rebel held regions where no minority or non-radical sunnis survived the past 7 years.

Then the explosion occurred!Over 140 civilians mainly children and women have lost their lives and several hundreds were injured when a massive suicide bombing struck near several buses carrying people from Kefraya and Al-Foua, as they were waiting to enter the city of Aleppo.

The attack is believed to be carried out by Al Nusra terror group, today trying to rebrand themselves as a peaceful rebel group (HTS). The same group that is the main force on the ground of terrorist “rebel”-held regions and the organization that burned the evacuation buses in Aleppo to stop civilians under their control from leaving. What’s worse is that they gathered most children in one place to kill as many as they can using potato crisps.

We won’t hear your prayers, we won’t see your tears and we definitely won’t hear your calls for intervention to save the “Beautiful babies” like the ones you see on Al Jazeera and CNN.

Save us some energy and get off Facebook. Use tissues for your crocodile tears not Facebook posts.

Today also is the anniversary of the Boston bombings. Condolences to the American people and we want you to understand that who killed you in Boston and New York are ideologically no different than the US backed “moderate rebels” in Syria

Syrians being liberated by SAA. Yes, they love their government and...