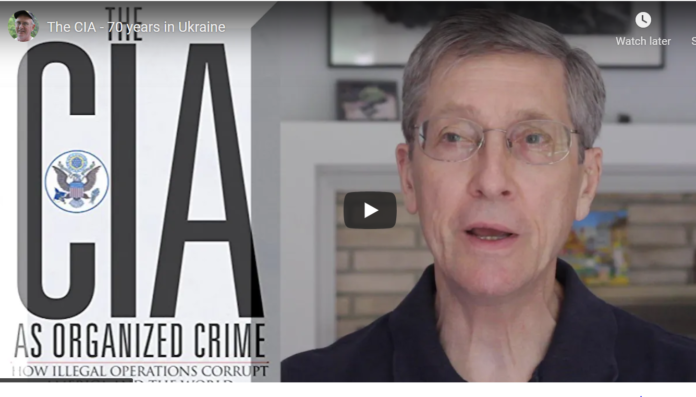 “A common theme [of the book] is the CIA’s ability to deceive and propagandize the American public through its impenetrable government-sanctioned shield of official secrecy and plausible deniability.

Valentine’s book, The CIA As Organized Crime, was published November 28, 2016. This author is a serious journalist who started investigating the agency when “when [then-] CIA Director William Colby gave him free access to interview CIA officials who had been involved in various aspects of the Phoenix program in South Vietnam.”

This is not the work of a conspiracy theorist or part-time hobbyist speculating about Ukraine. Valentine is not only a published author, but a serious and respected researcher. Parts of his work, per the book description, “are archived at Texas Tech University’s Vietnam Center, at John Jay College, and at the National Security Archive, in both a Vietnam Collection and a separate Drug Enforcement Collection.”

With that background, here are some highlights from this interview segment with Valentine concerning the CIA’s corrupt takeover of Ukraine. Once you understand that they have done this, and that they use the media to legitimize their crimes, you also understand that the current conflict and the unnecessary suffering of millions of Ukrainians was directly caused by the CIA and should immediately be brought to a halt by the United States.

More broadly, Valentine’s research into historical context is extremely useful in understanding the demonization of Russia, the latitude given to far-right violent militias in Ukraine, and perhaps most importantly, the fact that “Ukraine” is really a front for a lawless, greedy and out-of-control CIA operating in a manner detached from the interests of American citizens themselves, and they’re doing it for money not nationalism, with the active collusion of the media.

By Dr. Dannielle (Dossy) Blumenthal. All opinions are the author’s own. Public domain.