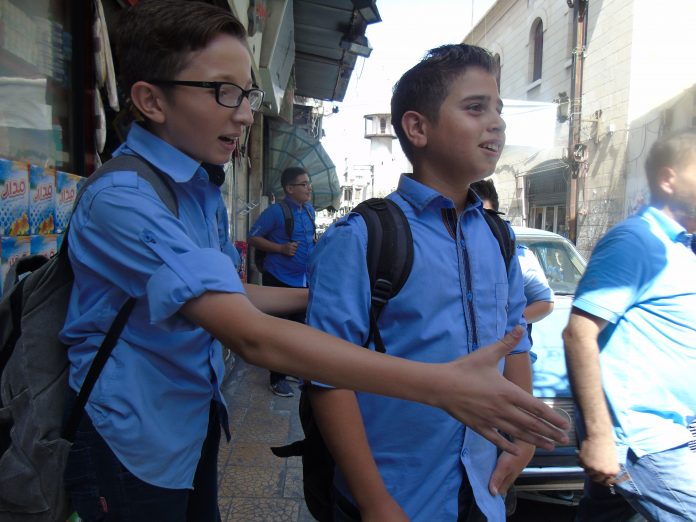 Washington-led NATO has always sought to destroy Syria as a functioning state. In order to achieve this goal, its air campaign and its terrorists have continuously targeted infrastructure. Schools, hospitals, and their employees have been targeted either for destruction or for repurposing to suit terrorist requirements.  The terrorists have always sought to impose their will on domestic populations.  Garnering Syrian public support was never a consideration.

A 2017 Tasmin news article notes, for example, that terrorists killed over 700 doctors and destroyed over 450 ambulances. The aforementioned source adds:

During the six years of the war against Syria, the terrorist groups destroyed 38 hospitals completely, 20 hospitals were partially damaged and the equipment and medical equipment were damaged. About 450 health centers were out of service and some 200 others closed due to their presence in unsafe areas. [1]

NATO terrorists take pride in their work. In the video below, we see them blowing up what was previously Aleppo’s renowned al-Kindi hospital, one of the Middle-East’s foremost anti-cancer centre.

NATO terrorists also use civilian infrastructure as shields.  Hence hospitals are frequently “re-purposed” to suit their needs. The buildings serve as sniper perches, Sharia jails, torture centers, warehouses to hoard medicine and food, command centers and a myriad other uses. Once this happens, “hospitals” lose their “protected” status under international law.[3]

Another scandal, as human feelings are overflowing today, do you know that after 8 years of imposing sanctions, or what they call unilateral coercive measures, because they are not imposed by you and are not legal, after 8 years, and with such overflowing human feelings we heard today, the United States and the European Union prohibit the export of medical devices such as the MRI and CT Scan to Syria until today, and the surgical procedures required by Syrian doctors for surgical operations? What is this overflowing human feeling that prevents the export of medical devices such as MRI and CT Scan and surgical thread for surgical operations?[4]

NATO-supported terrorists have consistently attacked Syrian schools as well, thus denying Syrian children access to secular education in terrorist-occupied areas. By 2017, the terrorists had reportedly murdered 480 school teachers and 700 school children[5]. The grim statistics would be higher by now.  As with hospitals, the terrorists also repurpose some schools, at times turning them into “Wahhabi learning centres”, but also for military purposes.

Western media, of course, obliterates all of these facts from its “reporting”, as it now focuses on protecting its al Qaeda assets in Idlib.  To set the record straight, Rachid Khallouf provides this information on a June 19 Facebook post:

The population of Idlib is 126,000. According to the 2010 census.
– Idlib city diameter 2.7 km.
– It has one traffic sign.
– Two government hospitals and six small private hospitals.
– abandoned by the local population, and currently inhabited by global terrorism.

Needless to say, there is nothing humanitarian about the terror war that the West and its allies are waging against Syria and its peoples.

So President Biden – I call on YOU to end this...