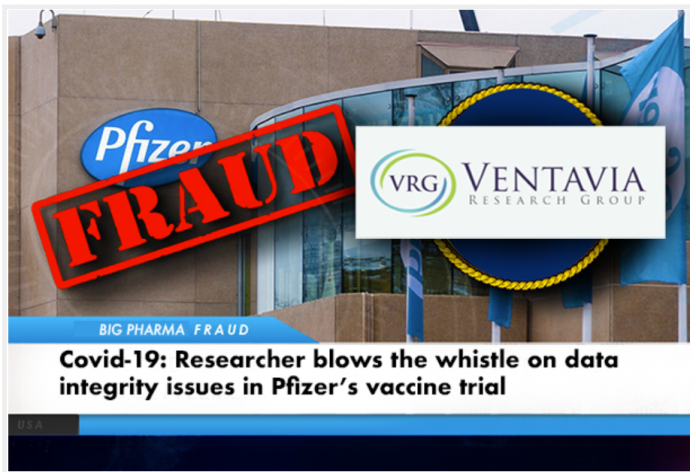 Remember all the hype surrounding Operation Warp Speed? It was hailed by politicians, public health mavens, and a fawning mainstream media as “a great achievement of science and innovation.” Anyone who dared criticise this supposedly herculean corporate project was immediately derided as an anti-vaxxer or a ‘far-right’ conspiracy theorist. But it was only a question of time before this narrative started to become unglued – despite the 24/7 propaganda cycle designed to prop it up.

Despite its best efforts to cover-up what appears to be a completely fraudulent corporate clinical trial for its experimental gene therapy mRNA Covid-19 ‘vaccine’ injection, a whistleblower has now confirmed what many had already suspected: the drug giant has relied on falsified trial data, has been caught unblinding trial participants, employing poorly trained vaccinators, and has not bothered to properly follow-up on serious adverse reactions (which might cast a shadow over its own self-generated ‘glowing reports’ given to lax government regulators)  following its human vaccine experiments.

The whistleblower, Brook Jackson, a former employee of the Ventavia Research Group, the company contracted by Pfizer to run its pivotal phase III Covid-19 vaccine trial, leaked a series of stunning revelations to the British Medical Journal highlighting the shady practices and the obvious lack of any meaningful regulatory oversight.

It should also be noted here that Pfizer, along with other members of the transnational corporate drug cartel, have been previously caught conducting wide-ranging criminal activity and fraud, and was forced to pay out billions in reparations for their illicit activities.

SEE ALSO: COVID-19: The Emergence of the Pandemic Industrial Complex

In addition to this, all of the major vaccine manufacturers have managed to fool the public by intentionally misrepresented their claims of “effectiveness” by using the deceptive ‘Relative Risk Reduction’ statistic, therefore falsely inflating their already spurious claims about the prowess of their experimental products to make people believe that these vaccines are somehow “95 percent effective” in protecting them from Covid-19 when in fact the true number, the Absolute Risk Reduction, is less than 1 percent effective.

This latest incident is yet another blow to sinking credibility of an institutionally corrupt pharmaceutical industry.

In autumn 2020 Pfizer’s chairman and chief executive, Albert Bourla, released an open letter to the billions of people around the world who were investing their hopes in a safe and effective covid-19 vaccine to end the pandemic. “As I’ve said before, we are operating at the speed of science,” Bourla wrote, explaining to the public when they could expect a Pfizer vaccine to be authorised in the United States.1

But, for researchers who were testing Pfizer’s vaccine at several sites in Texas during that autumn, speed may have come at the cost of data integrity and patient safety. A regional director who was employed at the research organisation Ventavia Research Group has told The BMJ that the company falsified data, unblinded patients, employed inadequately trained vaccinators, and was slow to follow up on adverse events reported in Pfizer’s pivotal phase III trial. Staff who conducted quality control checks were overwhelmed by the volume of problems they were finding. After repeatedly notifying Ventavia of these problems, the regional director, Brook Jackson, emailed a complaint to the US Food and Drug Administration (FDA). Ventavia fired her later the same day. Jackson has provided The BMJ with dozens of internal company documents, photos, audio recordings, and emails.

On its website Ventavia calls itself the largest privately owned clinical research company in Texas and lists many awards it has won for its contract work.2 But Jackson has told The BMJ that, during the two weeks she was employed at Ventavia in September 2020, she repeatedly informed her superiors of poor laboratory management, patient safety concerns, and data integrity issues. Jackson was a trained clinical trial auditor who previously held a director of operations position and came to Ventavia with more than 15 years’ experience in clinical research coordination and management. Exasperated that Ventavia was not dealing with the problems, Jackson documented several matters late one night, taking photos on her mobile phone. One photo, provided to The BMJ, showed needles discarded in a plastic biohazard bag instead of a sharps container box. Another showed vaccine packaging materials with trial participants’ identification numbers written on them left out in the open, potentially unblinding participants. Ventavia executives later questioned Jackson for taking the photos.

Early and inadvertent unblinding may have occurred on a far wider scale. According to the trial’s design, unblinded staff were responsible for preparing and administering the study drug (Pfizer’s vaccine or a placebo). This was to be done to preserve the blinding of trial participants and all other site staff, including the principal investigator. However, at Ventavia, Jackson told The BMJ that drug assignment confirmation printouts were being left in participants’ charts, accessible to blinded personnel. As a corrective action taken in September, two months into trial recruitment and with around 1000 participants already enrolled, quality assurance checklists were updated with instructions for staff to remove drug assignments from charts.

In a recording of a meeting in late September2020 between Jackson and two directors a Ventavia executive can be heard explaining that the company wasn’t able to quantify the types and number of errors they were finding when examining the trial paperwork for quality control. “In my mind, it’s something new every day,” a Ventavia executive says. “We know that it’s significant”….

Continue this story at the BMJ

NOTE: For a useful explanation of Pfizer’s claims of a “safe and effective” vaccine, watch this video presentation below from the Canadian Covid Care Alliance supports Informed Consent. Here is what you need to know:

COVID Vaccines Are 7,402% Deadlier Than All Other Vaccines Combined, Warns UK Medicine Regulator/ By Lance Johnson

Austria: Clear Sight or at the Abyss of Chaotic Tyranny. “Parliaments...