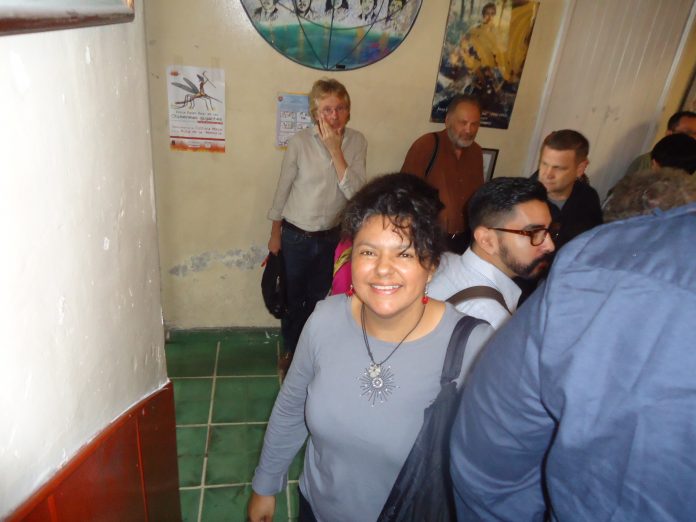 Hondurans have experienced increased levels of violence since the coup and unprecedented levels of murder and criminalization of politicians, human rights advocates, labor activists and journalists

Living conditions in Honduras have gone from bad to worse since the democratically elected president Manuel Zelaya was ousted by a military coup in 2009. The rupture of democratic governance has set Honduras back decades.  A study by the Washington-based “Center For Economic And Policy Research”notes that “In the two years after the coup, Honduras has had the most rapid rise in inequality in Latin America, and now stands as the country with the most unequal distribution of income in the region.”. From 2010-2012 the extreme poverty rate has increased by 26 percent.

Hondurans have experienced increased levels of violence since the coup and unprecedented levels  of murder and criminalization of politicians, human rights advocates, labor activists, journalists and indigenous leaders.  Bertha Oliva of the Committee of Relatives of the Disappeared and Detained in Honduras testified before the Inter-American Commission on Human Rights (IACH) that death squads are targeting social leaders and others just months prior to the elections.

Canadian-based civil society organizations, document in “Honduras: Trade And Investment At The Expense Of Human Rights”  some of the shocking statistics of a country in distress:   7,172 murders were committed in 2012 alone (a record high), and an average of 10 massacres per month were recorded in 2013.

Not surprisingly, a poll by the Center for Studies for Democracy (CESPAD) revealed widespread dissatisfaction:  Only 3.2 % of the population felt that the current development path was to the benefit of the majority of the population; 78% of the people polled were dissatisfied with the current governance; and 98% of Hondurans felt that urgent change was needed.

Instead of taking measures to help improve living conditions, however, Canada and the US are promoting hyper-neoliberalism in Honduras and offering tacit political and economic support to a regime that has taken power via illegitimate elections, arguably exacerbating the human rights crisis.  In this sense, Canada and the US are said to be on the “wrong side of democracy” in this on-going tragedy.

Canada, for its part, has finalized a parasitical “Canada-Honduras Free Trade Agreement”, which promises to further entrench and empower the elites in Honduras, to the detriment of most Hondurans, and the country. The agreement that was negotiated in secret proposes to increase the economic activity in the country, and therefore the Gross Domestic Product (GDP), but it will not benefit the majority of Hondurans.  Instead, it will further exacerbate the divide between the rich and the poor, in this “asymmetrical” society, where the elite minority controls the levers of power and wealth.

Mining companies will continue to usurp natural resources, and contribute to the militarization of Honduras by funding state security to protect their investments and exploiting women and indigenous labour that is not protected by collective bargaining or other labour “rights”. Once the resources are depleted in the corporate regulated environment, the companies will leave behind “externalities”, such as serious community health problems and environmental devastation as profits flow back home to the north. Such is the case of Vancouver based Goldcorp’s San Martin mine in Siria Valley.

The same exploitation of resources and people is endemic in the “Free Trade Zones”,

or “maquilas”, home to clothing manufacturers, spinning mills, call centers, and agro-export companies. The (mostly female) workers here are treated as commodities as well:  unions are neutered, while labour and human rights are for the most part ignored. The Honduran Women’s Collective (CODEMUH by their Spanish acronym) has come out condemning the “free” trade deal and exposed the exploitive work conditions in garment factories operated by Montreal-based Gilden Activewear.

Indigenous workers and women are the new “slaves” in this neo-colonial world where transnational companies, empowered by “trade agreements” and local governments focus on profits at the expense of communities.

These secretive corporate empowerment “faux deals” need to be fully disclosed and debated in parliament, before they are signed and ratified.  Otherwise, transnational corporations will continue to run roughshod over democracies and freedoms throughout the world.  The status quo is toxic to all but the globalized 1%.