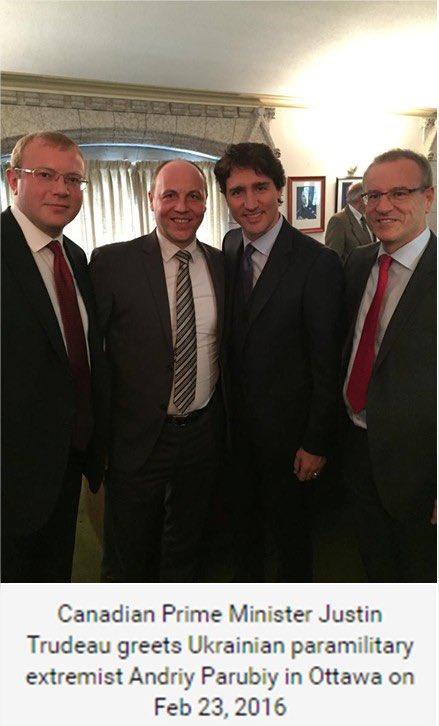 Trudeau has referred to swastikas intimating that the Freedom Convoy organizers are supportive of Neo-Nazi symbols.

The media has gone into high gear:

“Canada needs an explicit ban on swastikas and other “loathsome” hate symbols, says one NDP MP.

NDP House Leader Peter Julian says he is looking at reintroducing a private member’s bill that aims to ban the sale and display of hate symbols in Canada, like the swastikas and Confederate flags flown at a trucker convoy in Ottawa over recent days.

… “Other countries ban Nazi symbols and I think it horrified a lot of Canadians to see the Nazi flag on Parliament Hill.”

There were a couple of reported swastika events in Ottawa coupled with a Confederate flag, confirmed by the Times of Israel). The objective was to smear the Freedom Convoy Movement.

What the media fails to acknowledge is that Prime Minister Trudeau has consistently supported Neo-Nazi politics in Ukraine.

The Azov battalion which is part of Ukraine’s National Guard under the helm of the Ministry of the Interior is supported by Canadian tax payers.

The leader of the Neo-Nazi party Svoboda Andrey Korubij is a political buddy of our prime minister.

ALL of Canada Has Joined The Convoy, Except Trudeau. Accuses Freedom Convoy 2022 of Propagating Hatred, Racism and Violence

Is it a matter of concern that Canadian forces dispatched by our government are training Nazi paramilitary forces in Ukraine.

According to the Ottawa Citizen (November 9, 2021)

“Canadian officials who met with members of a Ukrainian battalion linked to neo-Nazis didn’t denounce the unit, but were instead concerned the media would expose details of the get-together, according to newly released documents.

The Canadians met with and were briefed by leaders from the Azov Battalion in June 2018. The officers and diplomats did not object to the meeting and instead allowed themselves to be photographed with battalion officials despite previous warnings that the unit saw itself as pro-Nazi. The Azov Battalion then used those photos for its online propaganda, pointing out the Canadian delegation expressed “hopes for further fruitful co-operation.”

There is ample evidence of Canadian and US support to Neo-Nazis in Ukraine going back to the 2014 Euromaidan,

Andrey Parubiy was also received by the US Congress
https://www.youtube.com/embed/mlh6gJmmlN8

Nazis in Ukraine: Seeing Through the Fog of the Information War/By...