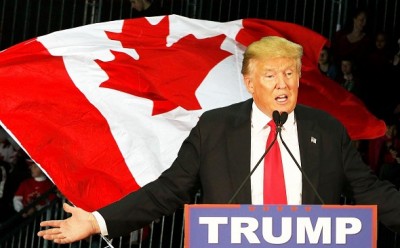 Subsequently, in January 2013, two Canadian Security Intelligence Service (CSIS) officers made an unannounced visit to Stone’s home, questioning him about his trip to Iran. Stone felt anxious and intimidated. He felt that the visit amounted to a suppression of his Constitutional rights of freedom of expression. Consequently, he filed a complaint with the Security Intelligence Review Committee (SIRC).

SIRC dismissed Stone’s complaint, but recommended that the spy agency revisit its interviewing policy, and chided the officers for their sloppiness with note-taking.

Stone, for his part, takes solace from the fact that, despite the dismissal, the case highlighted for a broader Canadian audience, that talking to agents in the aforementioned circumstances is voluntary.

All of this was covered by Canada’s mainstream media. But the broader issue of the irony of the incident was entirely omitted.

“if CSIS is looking to find state sponsors of terrorism, they should look much closer to home – in Ottawa, in fact, at 26 Sussex Drive, the prime minister’s residence. Under the Harper government, Canada played a significant role in organizing the proxy war for regime change in Syria, in which terrorist mercenaries from over 80 countries (including Canada) have taken part. In December 2011, for example, the Canadian ambassador to Tunisia, Glenn Davidson, was tasked with organizing the pre-conference to the founding conference of the so-called “Friends of Syria” Group of Countries (FSG).

The FSG was founded a few months later in Tunis in February 2012, with Hilary Clinton sitting in the front row. The FSG was the international group of countries that organized, recruited for, co-ordinated, and funded the proxy war for regime change in Syria, which resulted in nearly half a million deaths and widespread destruction inside of Syria. In June 2013, the Harper government hosted a meeting of the Economic Sanctions Subcommittee of the FSG in Ottawa. That meeting, which Canada chaired, created a regime of broad international economic sanctions against Syria, which were illegal because the sanctions did not have the approval of the United Nations Security Council. However, the FSG illegal sanctions were very effective. They rendered hundreds of thousands of Syrians jobless, put the price of food out of reach of working people, and turned hordes of Syrians into refugees.

The FSA referenced in the above passage are sectarian terrorists. In 2013, they and their al Qaeda counterparts occupied and committed atrocities in the ancient, primarily Christian town of Maaloula Syria, and in the same year they committed genocide in Latakia, Syria, fighting shoulder to shoulder with other al Qaeda affiliated terrorists. “Moderate” terrorists never existed in Syria.

Mainstream media (MSM) messaging about Syria amounts to criminal war propaganda, and Canada’s direct support and sponsorship for all of the terrorists infesting Syria — where there were none prior to the West’s dirty war on this non-belligerent country – constitutes the supreme crime of War of Aggression according to Nuremberg Standards.

Without a doubt, Canadians’ freedom to express – and learn — the truth is almost completely suppressed in this country. Mahdi Darius Nazemroaya writes in The Globalization of NATO that

(t)he mainstream media is a vital instrument for inundating society with the views of the most powerful groups and organizations. It helps shape the views of what the sociologist C. Wright Mills has termed a mass society, one where most members are not involved in expressing their opinions as outputs, but only receiving opinions as instructions and as a form of social programming …

Stone’s case presents a window through which we can better perceive the blindness that the warmongering elites are imposing on us through their apparatus of social programming and deception.

Empire Perpetrates Its Dirty War on Syria Beneath the Protected Cover...

“Stories within Stories”: The CIA’s Strategies to Dupe the American Public