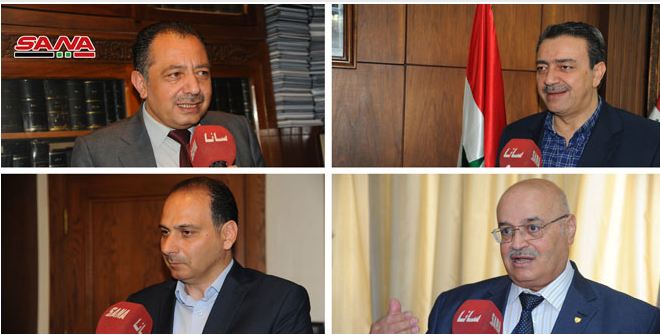 A number of Syrian lawyers have confirmed that the so-called (Caesar’s Law) is an international crime and a cycle of conspiracy against Syria, and it primarily targets the Syrian people by economic exhaustion and depriving them of decent livelihoods.

The Bar Association of Al-Fares al-Faris pointed out to the legal and legal role of the union in resisting the so-called (Caesar’s Law) and its unfair procedures and spreading awareness and publicizing it legally and by its seriousness and purpose, explaining that imposing sanctions on Syria by the American administration and blockading its people represents a disruption in the state system issued by it and in violation of the Charter of Nations The United States, stressing that this law is doomed to failure, like any other previous decisions that America tried to impose on countries illegally.

Lawyer Osama Abu Al-Fadl said that the so-called (Caesar’s Law) is an assault on the right to life because it affects entire countries and peoples and therefore can be described as war crimes to harm the lives of citizens and affect their livelihood.

Lawyer Mustafa Mlehan indicated that the measures imposed by the United States on the Syrian people through what is called (Caesar’s Law) are contrary to private international law and the United Nations Charter 1954, which stipulates respecting the sovereignty of states to one another and not attacking any country against another, while this law constitutes an attack on the Syrian state Its purpose is to pressure Syria and impose political dictates on it.

Lawyer Ahmad Al-Nabulsi saw that the so-called (Caesar’s Law) is a unique case that history did not witness before before where injustice is represented in its most brutal manner because it targets a people who have suffered from terrorism for more than ten years and this law comes in conjunction with the terrorist war to target the Syrians with their livelihood making it clear that America has no right Nor can others interfere in the internal affairs of any country in the world, pointing to the role and duty of lawyers in exposing this law and its immoral and inhuman consequences.

Lawyer Raed Al-Akkad considered that the so-called “Caesar’s Law” is part of the conspiracy against Syria, accompanied by a media storm aimed at weakening the resolve of the Syrian people, who have been under siege and coercive economic sanctions unilaterally for years, not a new order.

Attorney Jamil Al-Hoshan pointed out that the so-called (Caesar’s Law) mainly targets the Syrian people in terms of food and medicine in addition to the sanctions on the Central Bank of Syria and the countries that support Syria, which constitutes a clear violation of the principles of the United Nations.

(The so-called Caesar’s Law) is a repetition of the scenarios of anti-Syrian countries, according to lawyer Bassam Qashmar, who pointed out that the same method has been practiced by the same countries against Syria for many years, but each time in a more barbaric manner expresses the ugliness and hatred of these countries that work to support all that harms the people The Syrian people, starting from media misinformation and sedition, to the terrorist war, the Caesar’s Law and its procedures, and other colonial plans, called on other countries to boycott this law, which aims only to starve the Syrian people and deprive them of their right to food and drug supplies, and this is in violation of all international laws and laws.

The Syndicate of Syrian Lawyers affirmed in a statement that the so-called (Caesar’s Law) is an international crime and a clear violation of international covenants and treaties and constitutes an episode of conspiracy against Syria and the restrictions on its people, asking international and legal institutions and bodies to intervene to stop the application of this law due to its serious repercussions on the lives of Syrians and its violation of the law International and Human Rights.