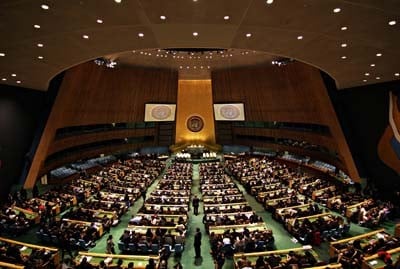 US and Ukraine Voting in Isolation Against UN Anti-Nazi Resolution Adopted November 12, 2021

The majority of UN member states supported this Anti-Nazi Resolution, as they had done since its inception in 2013, when Ukraine merely abstained, and Yanukovich was still the democratically elected President of Ukraine. The United States attempts to justify its opposition to this Resolution for nine years, with a variety of bogus explanations, originally “in defense of free speech,” but considering the recent draconian censorship imposed in the US today, and the imposition of the vaccine mandate, violating the Nuremburg Code and the UNESCO Universal Declaration of Bioethics and Human Rights, the US was obliged to contrive another explanation for their support for burgeoning neo-nazism, now attributing the Resolution to a Russian disinformation campaign.

Ukraine is now a puppet of the US, since 2014, when the US sponsored overthrow of President Yanukovich in Kiev was  orchestrated by Victoria Nuland of the infamous “F**k the EU” fame, during which time she and her cohorts placed neo-nazis in the most powerful positions of the regime in Ukraine.

This UN Resolution Prohibiting the “Glorification of Nazism” is a crucially needed rebuttal to the obfuscations of the notorious “Prague Declaration,” with its contrivance of the “double genocide” theory, tantamount to Holocaust Denial.  So far from being any form of “Russian Disinformation campaign,” the Anti-Nazi resolution attempts to protect historic truth, and the truth that it was predominantly the 30 million Soviet heroes who died to defeat Hitler, and ultimately won World War II, with the help of the munitions provided by US President Franklin Delano Roosevelt, under lend-lease, which he had to virtually demand be honored.  Although Roosevelt was loved, and virtually revered by the majority of the American people, there were powerful pro-nazi movements within the USA, including at the State Department, who hated him, and to whom he replied:  “I welcome their hatred.”

Nazi sympathies have always existed in the US, primarily because Nazism is “better for business,” and slave labor drives up profits for the capitalists;  and though there were many heroic anti-nazi fighters in Ukraine, many of whom gave their lives in the “Great Patriotic War,”  there was a powerful nazi underground in Ukraine, led by Stefan Bandera.   It continues today.

“Over his lifetime, Lev Dobriansky, who led the Ukranian Congress Committee of America (UCCA),…..ardently supported the ambitious postwar aims of Stefan Bandera (1909-1959), and his dominant, more radical faction of the OUN that arose in 1941, the ‘Banderites’ (OUN-B).  The OUN, founded in 1930 was, in truth a terrorist organization that emulated the Nazis in words and deed for the sake of ‘liberating’ Ukraine.  Bandera was sentenced to life in prison for the 1934 assassination of the Polish Interior Minister, but he escaped at the outbreak of World War II.  Meanwhile, Hryhorii Matseiko, the OUN assassin who gunned down the Polish minister, had fled to South America.  As Bandera established the OUN-B, President Roosevelt’s Secret Service was on the lookout for Matseiko, a “Ukranian Terrorist” believed to be in the United States because the Germans promised him ‘a very considerable financial reward if he should have the ‘same success’ with President Roosevelt.”

Throughout the Administrations of Obama, Trump and Biden, the US has endorsed the resurgence of Nazism throughout Europe and elsewhere, and opposed this UN Resolution prohibiting the rise and glorification of neo-nazism.

The now neo-fascist vaccine mandate forced upon citizens of the US and other nations, including the UN itself, the violation of the Nuremberg Code and numerous UN Resolutions protecting human rights, especially the right to bodily autonomy, indicate an ominous global trend toward totalitarianism which must be opposed by all necessary means.  Otherwise, Hitler’s diabolic agenda will become a global reality.

“The Great Reset” (with its “transhumans”) is an expanded, updated disguised version, of “Mein Kampf,” eugenics masquerading as “public health.”  A new cult has arisen with a tragically gullible mass of deceived people following the cult leader, who arrogantly and falsely claims to “represent science.”

Like the frog boiled to death in water, as the temperature is inexorably raised, until it becomes too late for the frog to escape, will humanity be boiled to death as the population “reduction” efforts accelerate the agenda, under the guise of exterminating Covid-19?

Carla Stea is a Research Associate of the Centre for Research on Globalization (CRG) and Global Research’s Correspondent at UN headquarters, New York.

Nobel Prize winner Luc Montagnier: “This vaccine does not protect at...

Stop the Genocide or Our Children Are Next, as Pfizer Seeks...