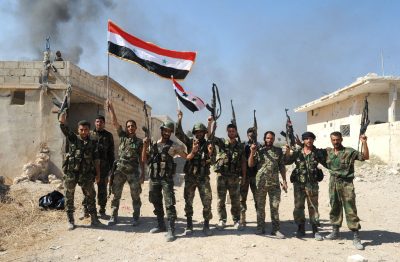 One year ago I was in Syria, and for my birthday on September 17 I learned that Western “Coalition” forces, who had been bombing illegally in Syria for years, had just murdered about 100 Syrian Arab Army soldiers who were stationed in the Jabal Thardeh1 area, where they were protecting the lives of their fellow Syrians from ISIS/Daesh terrorists.

The attack was no doubt executed in collaboration with ISIS, because immediately after the massacre, ISIS was able to occupy the strategically important position.

In terms of Western military strategy, little has changed except that now Syria and its allies are very close to restoring Syria’s sovereignty and its territorial integrity, as they crush the “opposition”, all of whom are supported by the West and its allies.

The West still wants to partition Syria, and for this they are using both “Kurdish” and ISIS “assets”. Coalition forces previously bombed bridges spanning the Euphrates, and ISIS assets did the same, so that they could better occupy and terrorize the oil-rich region. Meanwhile, Kurdish assets will be used to re-occupy and “legitimize” that which is not legitimate. The Kurds, ISIS, and the Coalition are all committing war crimes in their failing efforts to destroy and plunder Syria.

Dr Bouthain Shaaban2, political and media advisor to President Assad, recently remarked that US-backed SDF forces captured areas in northeastern Syria from Daesh “without any fighting,” thus demonstrating (yet again), the strategic collusion between SDF and Daesh to occupy and plunder the oil-rich areas, for the benefit of their imperial masters.

Every day, the West’s criminality becomes more transparent. Investigative reporter Dilyana Gaytandzhieva3, for example, recently uncovered primary-source documentation which demonstrates that the Pentagon falsified paperwork to covertly ship as much as $2.2 billion4 in weapons to terrorists in Syria.

Global Research announces the forthcoming release of  the print edition of Mark Taliano’s Book, “Voices from Syria”  which includes one additional chapter.