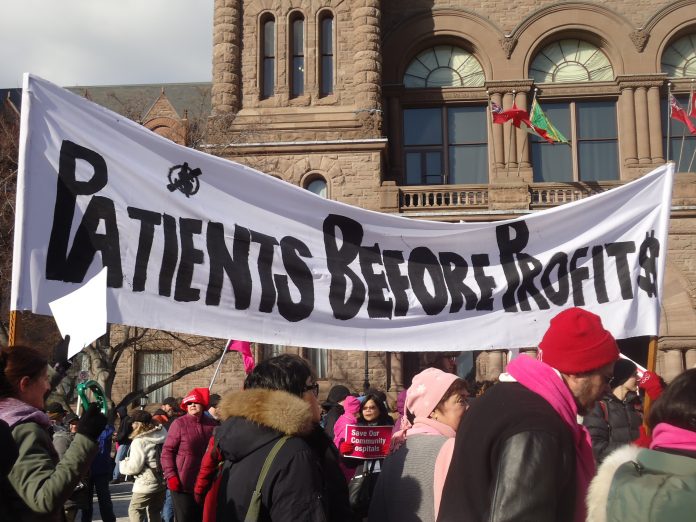 Canadians are forever being informed, explicitly or implicitly, that the solution to the crisis of the day, or decade, is a freedom-sounding word called “privatization”.  This, the free-marketeers tell us, will solve our problems.

The reality is invariably the opposite.  “Privatization” – also known as bailed-out, highly subsidized corporatism – is in fact the problem, not the solution.

Furthermore, the crises being addressed are often manufactured for the express purpose of rolling out a parasitical regime of corporatization that profits from calamity, even as its “host”, the public, is fleeced.

A tattered thread is woven into a seemingly endless series of crises, and it is the public sector, the commons, that is invariably being exploited.

Neo-conservative strategists disguise  the real problem, and deflect attention from it, using a myriad of strategies, all of which serve to instil what insurance whistle-blower Wendel Potter calls FUD – Fear, Uncertainty, Doubt—in the collective mental landscape of the masses.

According to neo-con politicians, union bosses and their minions, as well as public servants, and public institutions, are the causes of our economic woes, even as these are some of the few remaining polities that mitigate the damages caused by predator capitalism.

Two of Canada’s “emblematic” institutions, currently being undermined so that they can be replaced by inferior models, are “universal” health care, and Canada Post.

Canada’s public healthcare system is in distress.  Community hospitals are closing, wait-times are long, and the public is dissatisfied.  Corporate messaging proclaims that since the status quo of public universal healthcare is failing, then the answer must be privatization/corporatization.  Consequently, the 2004 Health Accord has not been renewed, and the federal government will be cutting $36 Billion over ten years from its Canadian Health Transfers (CHT’s) to the provinces.

The manufactured crisis in health care is chronic under-funding, and the solution is more comprehensive public funding, not corporatization.  Since 1981 hospital funding has decreased significantly as a share of Canada’s  health care budget.

clearly shows that the “private” components of health care far exceed its public counterparts in costs even as they deliver less. Listed below are some (of numerous) examples identified in the article:

What happened to Canada

Canada Post is also suffering from a manufactured crisis.  Marianne Lenabut argues in “What Happened To Canada” that Canada post ran a profit for the last 16 of 17 years, and that it has yet to receive a tax-payer bailout.  Yet the “solution” to the illusory crisis has been the creation of a real crisis, consistent with Shock Doctrine economics.  Canada Post is being restructured so that service costs increase dramatically even as services are deteriorating: bulk stamps will cost .85 cents and a single first-class stamp will cost a dollar, door-to-door urban delivery is being ended, and 8,000 postal positions are slated to be eliminated.

The crisis is being engineered so that the public will become frustrated, blame the victim (Canada Post), and welcome a false “market-based solution” so that the private sector can roll in, and further erode the public domain.

James Clancy of the National Union Of Public And General Employees argues in “President’s Commentary: Privatization is not the answer at Canada Post, modernization is” that “when the final play is made in this game, Canadians will see private companies selling mail service at a higher cost.  There will be no accountability mechanism if this happens because the public will no longer own the service.”

These two important examples are, nonetheless, the tip of the iceberg. The list is long, but the strategies are consistent: create a crisis to undemocratically impose inefficient, expensive corporate models in domains best suited to public funding.

Internationally, the same strategies are being used, and the descriptors are the same: predator economics, shock doctrine economics, neoliberalism.  But, when supranational polities such as the World Bank or the International Monetary Fund (IMF) impose these strategies on other countries, the process is called colonialism.