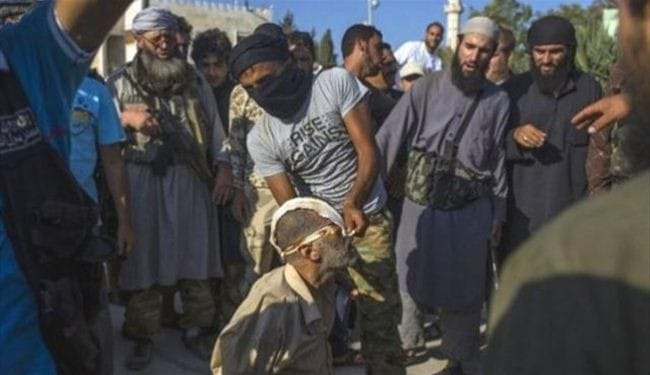 From Mark Taliano‘s “Voices from Syria”: A witness to the massacre that was perpetrated by foreign-backed terrorist groups in Adra area In Damascus countryside in December 2013 described the scene in these words:

The “rebels” began to attack the government centers, and attacked the police station – where all the policemen were killed after only a brief clash because of the large numbers of attackers.

They ( the attackers) then headed to the checkpoint located on the edge of the city before moving to the clinic, where they slaughtered one from the medical staff and put his head in the popular market. They then dragged his body in front of town’s people who gathered to see what was happening.

Bakery workers who resisted their machinery being taken away were roasted in their own oven.

Jabhat al-Nusra and Islamic Front fighters went from house to house with a list of names and none of those taken away then has been seen since.

When the Syrian Army would try to enter Adra, the jihadists would throw women and children from the 20.000 people it captured off the top floors in front of the army. This is one of the massacres perpetrated by the so-called ” Moderate opposition” .