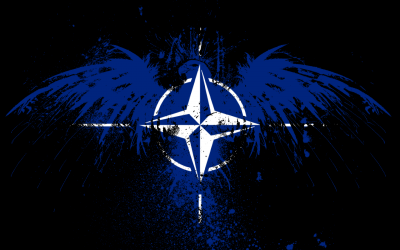 Whereas Canada claims to have a “feminist” foreign policy, based on humanitarian, and civilizing considerations, “we” support al Qaeda and affiliated terrorists in Syria and beyond. How to explain this glaring contradiction?

As Canadians, we are immersed in colonial mindsets and institutions. In fact, we actively destroy human rights in Syria, and everywhere else we target militarily. Libya is very anti-feminist (and pro-slavery)[1] thanks to us. Prior to the NATO war on Libya, the country boasted the highest standard of living in Africa.[2]

Kiev is neo-Nazi infested[3] thanks to our “interventions”, and Afghanistan is very anti-feminist despite Amnesty International’s 2012 urging, ‘NATO: keep the progress going’,[4] on women’s rights in Afghanistan.

We are sold (and easily accept) the lie that Assad is a “brutal dictator”[5] presumably so Canadians will think that we are “saving” Syrians. His replacement will be ISIS/al Qaeda.

Would this be “good governance”?

We already know what western-imposed “good governance” looks like in terrorist-occupied areas of Syria. Terrorist-gangs slaughter each other and civilians, torture, behead, use coercive tactics such as hoarding of food and medicine, enslave people, selectively follow fundamentalist “interpretations” of Sharia Law, forbid regular, secular schooling for kids, train child terrorists, kidnap, engage in sex slavery, organ harvesting, and economies of plunder, use humans as shields, impose destitution, poverty, and disemployment and on and on. How are these criminal depravities “humanitarian” or “civilizing”? In what ways do they represent “democracy and freedom”?

What about “revolutions”? Are regime-change wars using proxy fanatic terrorists revolutions to be supported? Since when are al Qaeda and affiliated terrorists “rebels”?

The colonial lies are outrageous, and completely disconnected from reality, but we believe them nonetheless because our minds have been colonized by 24/7 mind-numbing colonial media and colonial political “representatives”.

Can we escape from this barbaric supremacist mindset that permeates our lives and our minds? Prof. Anderson provides some solutions.[6] He urges, for example, that we should

As US-led NATO and its vassal states target one country after another for destruction, we would do well to remember that the transnational oligarchy and their policymaking circles are also targeting you and me, and their foundational ideology is the Big Lie.